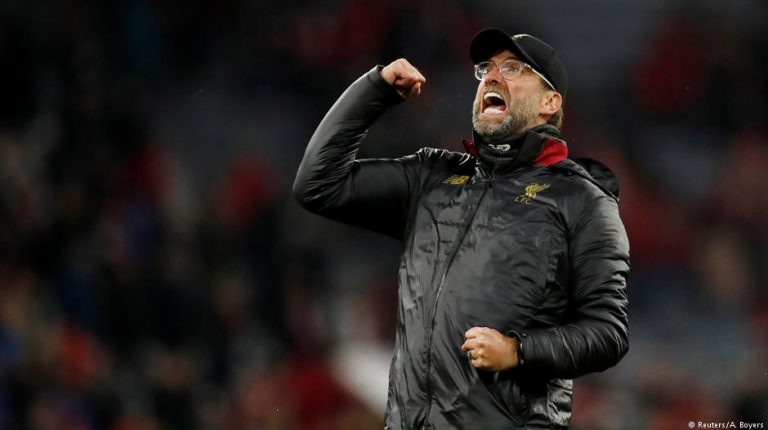 With Liverpool still competing on two fronts, Jürgen Klopp’s rhetoric and the pressure he’s facing haven’t changed. To shake his reputation as a loveable loser, the “Normal One” needs to deliver a title this season.At the elite level, titles are the measure of success in football. While his charisma has reignited the fervent passion that Liverpool FC is famed for, silverware remains the only thing Jürgen Klopp has failed to deliver since taking over in October 2015.

Since completing a league and cup double with Borussia Dortmund in the 2011-12 campaign, Klopp has been on the losing side of six major finals, four with LFC.

The most recent of which – a Champions League final loss to Real Madrid – sparked fears of a decline similar to the one experienced by BVB towards the end of Klopp's tenure. Those have since been waylaid as Liverpool have maintained their momentum despite suffering set-backs.

One-point clear at the top of the Premier League with five games to play and in the quarterfinals of the Champions League, the Reds have silverware within their grasp on two fronts.

According to Klopp, Liverpool fans would jump from a tall building it would end their 29-year wait for a Premier League title and would "sacrifice" the Champions League to do it.

However, the former Mainz man is incapable of settling for anything less than the maximum and, when asked about his own perspective replied with: "Why not both?" The 51-year-old's response is indicative of his serious, yet sartorial tone, but also of the pressure he puts on himself, not to deliver for personal glory, but for those that matter most to the club.

"I would certainly not die unhappy if I don't become champion again as a coach," Klopp told Die Welt am Sonntag. "But, I'm here to try everything to do it. The club has given me and my coaching team the means to put together a good team.

"If we can use that to make the fans happy with the title, it would be an absolutely huge thing for me. But, it means even more to the fans. To exaggerate: some [Liverpool fans] would be ready to jump off the 16th floor of a building if it meant winning the title."

That kind of passion is not foreign to the fist-pump's biggest fan, who in the words of club legend Jamie Carragher "would be like a god", if he were able to end the season with Liverpool's first league title since 1990.

Klopp in a pressure-cooker

There are five games remaining to decide Klopp's titanic tussle with Pep Guardiola for the Premier League title, which also happens to be the number of games required to go one better than last season's Champions League loss in Kyiv. If they want another shot at lifting the trophy in Milan on June 1 though, they will first have to book their ticket.

With that in mind, Liverpool welcome Porto to Anfield Road in the first leg of their quarterfinal tie at Europe's top table on Tuesday. The Reds beat the Portuguese side 5-0 on aggregate in the round of 16 en route to last season's final, but Klopp battered back talk of it being a simple step into the final four.

"We know that a lot of people are saying that Porto were the easiest draw, but that's nonsense," he said. "Porto may not have as many big a name as City or Barcelona, but they are a real challenge. We've got to give everything to reach the next round."

While Klopp seems intent on keeping his feet planted firmly on the ground, he can't expect the fans, whom he often refers to as Liverpool's "advantage,",to do the same. The manner of the win over Bayern Munich only served to stoke the fires of optimism burning in Merseyside, but with that comes a growing sense of pressure.

Nevertheless, the 51-year-old is confident his "mentality monsters" can withstand the challenges that lie ahead. If that results in silverware come the campaign's conclusion, Klopp would likely become immortal in a city in which he's already loved.