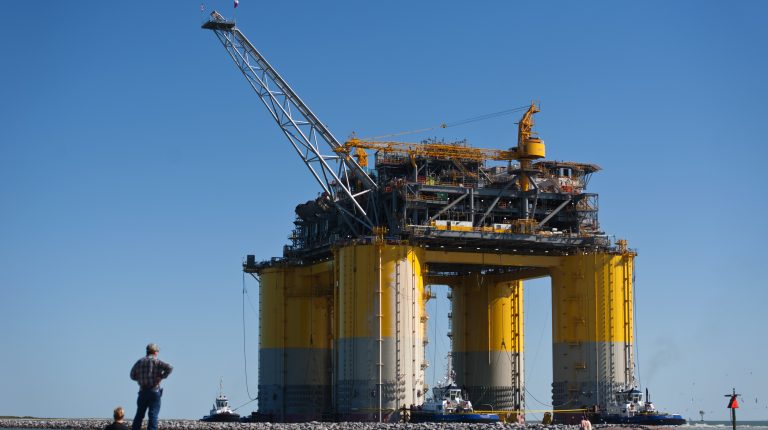 As geo-economic tensions across the globe ratcheted up during 2018, respondents to the Global Risks Perception Survey conducted by the World Economic Forum (WEF), said that expecting increasing risks in 2019 related to “economic confrontations between major powers” (91% of respondents) and “erosion of multilateral trading rules and agreements” (88% of respondents).

According to the WEF report released, geo-economic divisions come as the rate of global growth appears to have peaked. The International Monetary Fund (IMF) forecasts a gradual slowdown over the next few years. This is mainly the result of developments in advanced economies, but projections of a slowdown in China – from 6.6% growth in 2018 to 6.2% this year and 5.8% by 2022 – are a source of concern.

So, too, is the global debt burden, which is significantly higher than before the global financial crisis, at around 225% of the GDP.

In addition, a tightening of global financial conditions has placed a strain on countries that built up dollar-denominated liabilities while interest rates were low.

Furthermore, the report cites that as the global economy faces some headwinds, cross- border trade – long seen as a means of mitigating geopolitical risk by embedding powers in mutually beneficial relationships – is now frequently seen as a tool of strategic competition.

These developments hold risk for the MENA region, home to trade-dependent economies, where, according to the IMF, total trade-to-GDP ratio amounts to approximately 66%.

Economic and governance risks to the MENA region

The report indicates that exogenous factors, such as geo-economic division, climate change and technological threats all pose a particular risk to the MENA, but so, too, do hazards that are more regional in nature.

According to respondents in the Middle East and North Africa to the Executive Opinion Survey, the top two risks across the region for doing business are “energy price shocks” and “unemployment or underemployment”.

Furthermore, according to respondents’ top risk, “energy price shock”, comes at a time when some countries have taken steps towards diversification, but the region is still largely a hydrocarbon economy, heavily reliant on revenue from this sector. Oil prices increased substantially between 2017 and 2018, from around $50 to$75.

This represents a significant fillip for the fiscal position of the region’s oil producers, with the IMF estimating that each $10 increase in oil prices should feed through to an improvement on the fiscal balance of three percentage points of the GDP.

However, vulnerabilities to swings in oil prices have not disappeared and are particularly pronounced in countries where government spending is rising. This group includes Saudi Arabia, which the IMF estimated in May 2018 had seen its fiscal breakeven price for oil — that is, the price required to balance the national budget — rise to $88, 26% above the IMF’s October 2017 estimate and also higher than the country’s medium-term oil price target of $70–$80.

“It is no surprise, then, that Saudi Arabia remains one of five countries in the region that rank “energy price shock” as the top risk to doing business in our survey, along with Bahrain, Kuwait, Oman and Qatar,” the report indicates.

The risk of an episodic energy price shock signals a broader, systemic risk for the region. Unless the MENA economies diversify, business and society will not only be hostage to oil market fluctuation in the short term but also will be ill-prepared to thrive in the global economic landscape of the Fourth Industrial Revolution.

As technology increasingly disrupts the business landscape, economies will place a premium on what is above ground – skills and innovation – rather than on what is below. 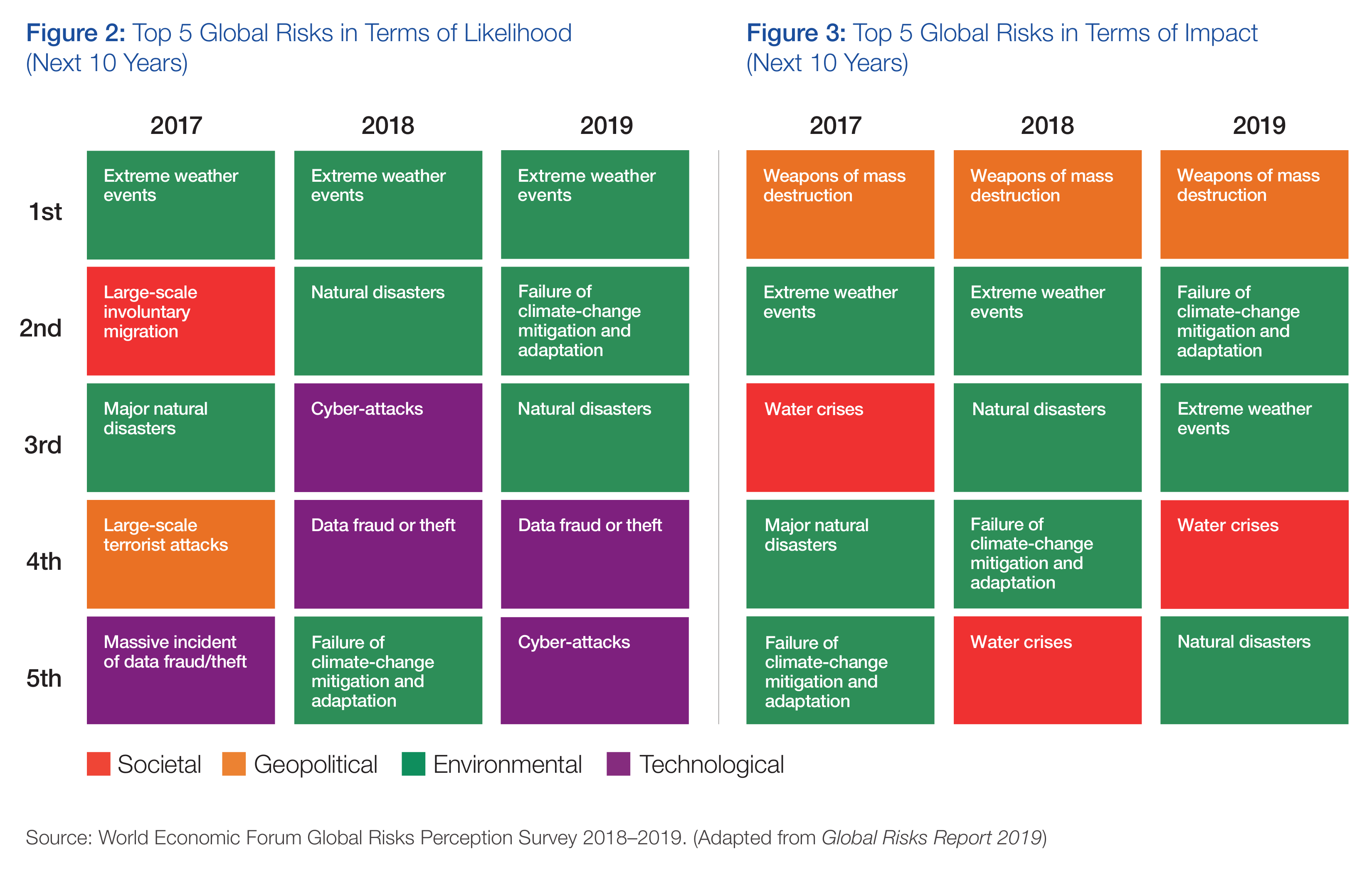 On the labour side, the changes brought on by the Fourth Industrial Revolution will create disruption to employment across industries.

According to McKinsey, by 2030, up to 375 million workers (14% of the global workforce) may need to find different occupations because of new efficiencies such as automation. Yet, already in the Middle East the labour landscape is dire.

For the past 25 years, the rate of unemployment among young people in the MENA region has been the highest in the world and in 2017, the rate was 30%.

There are significant risks to the economies being able to absorb the labour force, particularly since 27 million young people will enter the labour market over the next five years.

Speaking in Dubai in February 2019, the head of the IMF, Christine Lagarde, was critical of “spending kept off-budget” as well as well as high levels of borrowing. Lagarde said, “With better governance, we can replace the ‘disintegration’ of corruption with the ‘integration’ of all into the productive economy. We can replace fasad with islah – reforms to set things right, to reconcile people with one another.”

“Terrorist attacks” were ranked as the third-leading risk in the Middle East and North Africa, according to respondents in the region to the Executive Opinion Survey. Similar to economic and governance issues, this risk is one that manifests from inside, rather than outside, the region.

Yet, it is notable that terrorism ranked so high in the opinion survey because it runs counter to the data on attacks. According to the Global Terrorism Database, the number of attacks in the MENA dropped by 38% in 2017 from the year before and the number of deaths fell by 44%. The most significant drops in

terms of incidents were in Turkey, Yemen and Saudi Arabia.

According to the respondents, despite the fact that while the absolute numbers may be declining, the relative number is high: the MENA is home to the largest share of incidents and deaths compared to the rest of the world, 31% and 44%, respectively.

Furthermore, the report cites another possibility that “terrorism” is acting as a proxy for respondents to capture an overall sense of insecurity in the region. Some analysts point to continued, longstanding frictions as a reason to dub the area from Morocco to Iran a “band of instability”.

More specifically, Syria and Yemen are ranked as countries of “very high alert” and Iraq as “high alert”, according to the Fragile State Index, and negative developments in these states can have repercussions that manifest in other states.

Similarly, instability in other countries, such as Libya, and fractures –and even outright hostilities – between some states in the Gulf and Levant add to overall regional insecurity. This, even as some factors, like the aforementioned drop in terrorist activity and the decline of the Islamic State, are trending in the right direction.

Toward risk mitigation and resiliency

For stakeholders across the globe, risk mitigation and resiliency can be heightened through a coordinated rather than go-at-it-alone approach. Preventing the harms of climate change from being realised – or, responding to effects in an effective manner when they manifest – for instance, is only possible through cross-sector and cross-border partnerships. Similarly, strengthening economic structures and governing institutions in the MENA region can best be achieved through a multi-stakeholder approach that leverages diverse resources, including skills and expertise, and aligns actors towards a common goal.

The risks of climate change and cracks in the global response

Eighty-five percent of respondents to the Global Risks Perception Survey expect “political confrontations/frictions between major powers” to increase in 2019. These rising geopolitical divisions are making it more challenging to address the biggest global risk – climate change.

Environmental risks dominate the results of the Global Risks Perception Survey for the third year in a row. This year, climate-related issues accounted for three of the top five risks by likelihood and four by impact over the next 10years.

Extreme weather was the risk of greatest concern, but survey respondents were increasingly worried about environmental policy failure. “Failure of climate-change mitigation and adaptation” ranked as number two in terms of impact this year.

The results of climate inaction are becoming increasingly clear. The year 2018 was the fourth warmest on record.

In the MENA region, Algeria had the hottest temperature –51.3oC – ever reliably recorded across the whole of Africa and Oman recorded a minimum temperature of 42.6oC. 6

Rising temperatures led the UN to warn that melting ice sheets were causing sea-level rise to accelerate. The World Bank identified 24 port cities in the Middle East and 19 in North Africa at particular risk of rising waters.

Climate change will also bring a second-order risk for the region. As countries around the world take steps to reduce their dependence on fossil fuels to stem the effects of climate change, the oil-based economies of the MENA region will feel the repercussions.

Yet, in stark contrast to the results of the Global Risks Perception Survey – respondents to which are the global stakeholder community – respondents in the Middle East and North Africa to the Executive Opinion Survey did not rank environmental issues high on the list of risks in the region. The lack of prioritising climate change points to a blind spot among stakeholders when it comes to considering the risks of the issue to the region.

Technology plays a profound role in shaping the global risks landscape in the near and longer term. Concerns about data fraud and cyberattacks were prominent again in the Global Risks Perception Survey, with 82% of respondents expecting cyberattacks in the form of theft of data or money and 80% expecting it in the form of disruptions of operations or infrastructure to increase in 2019. Similarly, “data fraud or theft” and “cyberattacks” ranked as the fourth and fifth risks, respectively, in terms of likelihood over the next decade.

Indeed, there were further data breaches in 2018, new hardware weaknesses were revealed, and research pointed to the potential uses of artificial intelligence to engineer more potent cyberattacks. Last year also provided further evidence that cyberattacks pose risks to critical infrastructure, prompting countries to strengthen their screening of cross-border partnerships on national security grounds. According to Cisco, 94% of companies in the MENA said they experienced a cyberattack in the past year and almost half of attacks, 48%, resulted in damage valued at over $500,000.

The rise in the flow of data across borders means that these types of risks are only expected to increase.