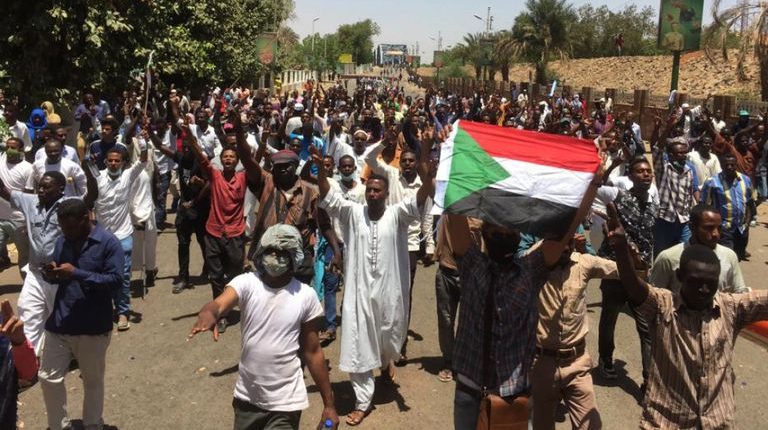 Seven people were killed during the protests which escalated during the last few days in Khartoum and Darfur, on Saturday and Sunday, according to the Sudanese Interior Ministry, as thousands of protesters continue their sit-in held outside the military headquarters in the Sudanese capital.

Sudanese security forces used rubber bullets, live fires, and tear gas against protesters, as demonstrators said that the police were trying to forcibly break up their sit-in which turned its fourth day on Tuesday.

Other uncertain reports stated that two soldiers were killed in the clashes while they were reportedly trying to protect protesters from the security forces.

Since last Saturday, thousands of protesters have been rallying outside the headquarters of the Sudanese military in central Khartoum. They called on the military to intervene and force President Omar Al-Bashir to resign.

Sudan has witnessed powerful mass demonstrations over the last several months which were originally sparked by the high increase in the costs of living. However, protesters now are demanding the toppling of Al-Bashir and his government, who has been in power since 1989.

Sudan’s Defence Minister, Awad Mohamed Ahmed Ibn Auf, vowed on Monday to protect the country from division. Auf asserted that the military understands the reasons behind demonstrations and the armed forces are not against the Sudanese people’s ambitions and hopes, but the army will never allow the country to slip into chaos.