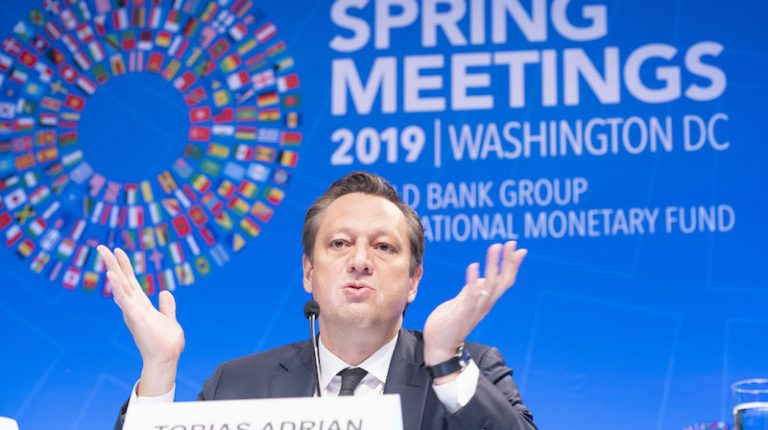 Tobias Adrian, financial counsellor at the International Monetary Fund (IMF), said that the markets sold off sharply late last year broadly across asset cases, amid growing signs of a slowing global economy and rising concerns about the US-China trade tensions.

Adrian added, “Against a backdrop of rising downside risks, policymakers across the globe took steps to prevent a sharper deceleration of the economy. Such a forceful response supported market sentiment and triggered a sharp rebound in risk assets. Despite this recent improvement, financial markets remain susceptible to a sudden tightening in financial conditions.”

Adrian pointed out that an abrupt deterioration in financial conditions could unmask financial fragilities that have built during the period of very low interest rates, explaining that in the current issue of the Global Financial Stability Report (GFSR), a more structured and systematic approach to monitoring financial vulnerability across regions and economic sectors is introduced.

He elaborated that financial conditions have tightened since the October 2018 GFSR but remain relatively accommodative, notably in the United States. After a sharp decline in the fourth quarter of 2018, financial markets rebounded strongly in early 2019 on growing optimism about the US-China trade negotiations as major central banks adopted more patient and flexible approaches to monetary policy normalisation.

Moreover, the GFSR said that the debt-service capacity has improved in most advanced economies and balance sheets appear strong enough to sustain a moderate economic slowdown or gradual tightening. Financial risk taking have increased and the creditworthiness of some borrowers has deteriorated.

Adrian remarked that portfolio flows to emerging markets are increasingly influenced by benchmark indices. However, emerging market bonds have quadrupled in the past 10 years to $800bn.

The GFSR’s estimates also suggest that 70% of country allocations of investment funds are influenced by benchmark indices.

Moreover, the report has highlighted the issue of house’s price spikes, noting that the recent rapid increase in house prices in many countries has raised concerns about the possibility of a price correction.

Adrian called on policymakers to communicate any reassessment of the monetary policy stance that reflects either changes in the economic outlook or unduly compressed market volatility.

In response to Daily News Egypt’s question, Adrian said that house prices hiked in Egypt due to the devaluation of Egypt’s local currency and inflation rates’ increases which participated directly in the spike of house prices of the country. He noted that that once the inflation rates decline and achieving financial stability, price corrections will take place.

He further noted that large house price declines can adversely affect macroeconomic performance and financial stability, as seen during the global financial crisis of 2008 and other historical episodes.

“These macro-financial links arise from the many roles housing plays for households, small firms, and for financial intermediaries as a consumption good, long-term investment, store of wealth, and a collateral for lending, among others. In this context, the rapid increase in house prices in many countries in recent years has raised some concerns about the possibility of a decline and its potential consequences,” Adrian noted, adding, “We call on policymakers to look at financial risks on the short-term and the long-term.”