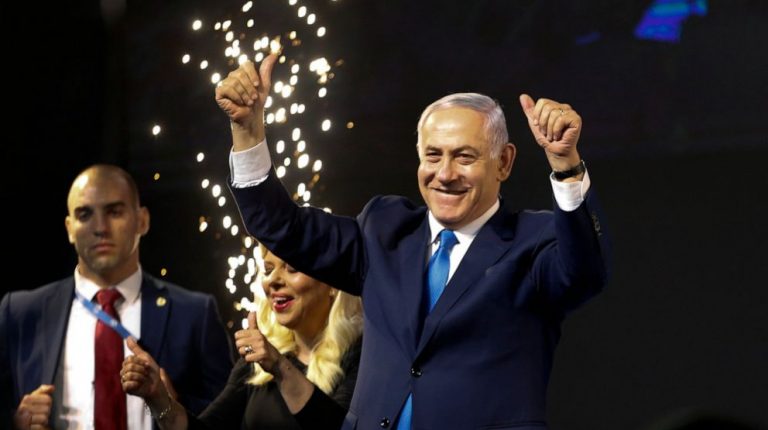 Israel Prime Minister Benjamin Netanyahu is presumably to form the next government after the right-wing parties gave him the majority in the new parliament, following a tight race with his centrist challenger Benny Gantz.

The Likud Party and Blue and White alliance, each secured 35 seats in the Knesset. Netanyahu and Grantz both claimed victory on Twitter as the exit polls released on Tuesday night.

However, the final results showed that the right-wing bloc gained 65 seats, while centre-left block only got 55. The 65-seat win to allow Netanyahu to head the new government.

On the other hand, the Labor Party incurred a huge decrease in its seats, gaining only six seats although the final opinion polls showed that the party might take 18 seats. While Hadash – Ta’al also got six seats.

The voters’ turnout estimated to be 61.3% until 8:00 pm on Tuesday, less than the 62.4% of last general election in 2015 according to the Central Election Committee. Around 6.3 million were eligible to vote in this Knesset’s elections at more than 10,000 polling stations.

On Twitter, the US President Donald Trump congratulated his close alley on the “landslide” victory. “I want to give a big ‘Congratulations!’ to my best friend Benjamin on his landslide victory tonight! Like me, Bibi knows how to run a country,” Trump tweeted.

Meanwhile, Chancellor of Austria Sebastian Kurz was among the world leaders who also congratulated Netanyahu on the winning.

“Congratulations to Prime Minister Netanyahu for an excellent showing in yesterday’s national elections,” Kurz tweeted on Tuesday night, adding, ” you (Netanyahu) have – once again – gained the trust of the people of #Israel in record numbers.”

Similarly, India Prime Minister Narendra Modi tweeted,” My dear friend Bibi, congratulations! You are a dear friend of India and I expect to continue working with you to take our two-way partnership.”

With results, Netanyahu is expected to become Israel’s longest-serving prime minister, surpassing David Ben-Gurion, the first prime minister of Israel. Netanyahu has been in power since 2009. He also led Israel from 1996 to 1999.

Despite the winning, Netanyahu will still face ‘dangerous’ charges of bribery, fraud, and breach of trust in three cases pending a final hearing.0