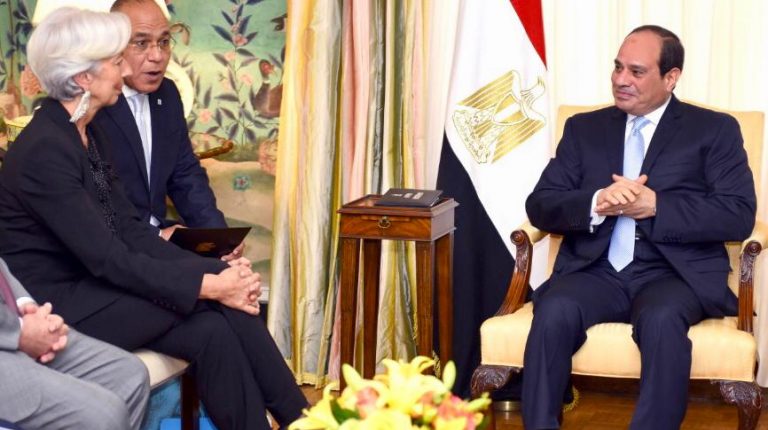 President Abdel Fattah Al-Sisi met with the Managing Director of the International Monetary Fund (IMF), Christine Lagarde, on Tuesday to discuss cooperation between Egypt and the IMF, in light of Egypt’s ongoing economic reform programme.

The meeting came during Al-Sisi’s five-day visit to the United States.

In the course of the meeting, the president expressed appreciation for the fruitful partnership and constructive cooperation between the Egyptian government and the IMF in implementing the comprehensive economic reform programme, according to a statement from the presidency.

He stressed Egypt’s keenness to continue cooperating with the IMF, considering the positive environment and investment opportunities provided by the partnership between Egypt and the IMF to investors and the international financial market.

For her part, Lagarde praised the Egyptian experience saying that various economic indicators in Egypt have improved, reflecting the successful application of the economic reform measures, according to the statement.

She stressed the IMF’s positive interest to continue the constructive cooperation with Egypt in order to successfully complete the final phases of the economic reform programme.

The president emphasised the Egyptian peoples’ significant role in the success of the state’s efforts to carry out the reform process, by displaying understanding and awareness of the inevitable need to carry out these reforms.

“This led to achieving progress which was confirmed by the positive economic indicators of the Egyptian economy, and recognised by the official IMF data, as well as the improvement of Egypt’s credit rating by specialised international institutions,” said Al-Sisi, according to the statement.

Moreover, the president also met with Ivanka Trump, adviser to US President Donald Trump, and discussed issues related to women’s empowerment, in view of the initiative launched by the White House called ‘The Women’s Global Development and Prosperity Initiative.’

The initiative aims to promote economic empowerment for women as a means of achieving societal harmony and enhancing economic prosperity.

Ivanka said that she plans to visit Egypt soon to promote the initiative, confirming her commitment toward enhancing consultations and coordination with Egypt in this regard.

Furthermore, Al-Sisi attended a dinner hosted by the US Chamber of Commerce also on Tuesday. Throughout the discussions, the president affirmed Egypt’s avidity to continue communicating with investors in order to learn more of the obstacles they face and to help them overcome these obstacles.

He praised the role of the US Chamber of Commerce and the Egypt-US Business Council in boosting economic and trade relations between Egypt and the US, highlighting the importance of the private sector as an engine for growth through increasing investments and the transfer of knowhow and expertise so as to serve the interests of both countries.

Following his US visit, the president will continue his tour Ivory Coast and Senegal, where he is expected to meet high level officials in both countries.