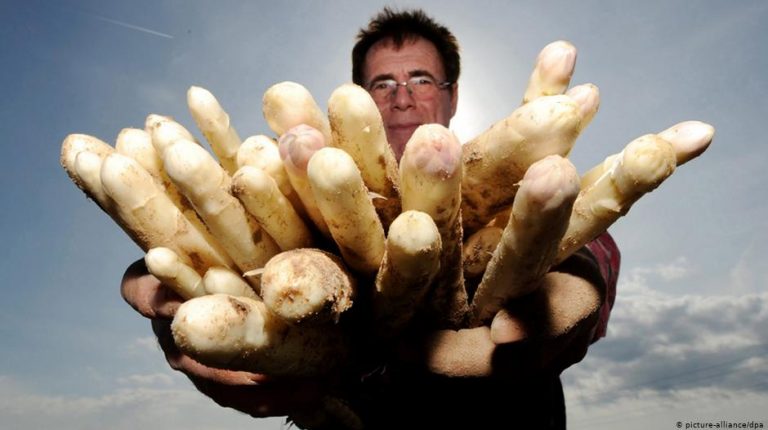 Springtime in Germany means the countdown is on for the country’s brief feast on a vegetable known as “white gold.” The Germans’ passion for white asparagus is celebrated in museums — and even by queens.The harvest in Germany has only just begun but as always, the end is already in sight for this seasonal vegetable: an old farmer's saying has it that when the cherries turn red, the time for harvesting asparagus is over.

More specifically, the season ends on June 24, the feast day of St. John. "Until St John's, don't forget this, you have seven weeks to eat asparagus," according to yet another old proverb. The plant simply needs to recover for the next year and a new cycle of pleasing Germans with nutrient-rich spears low in calories — as long as you don't smother the vegetables in melted butter or Hollandaise sauce!

The southwestern city of Schwetzingen, which presents itself as Germany's "Asparagus Town," offers a host of asparagus-related events in April and May, including art projects, photo exhibits, tours, workshops on how to cut the vegetable and the traditional Schwetzingen Asparagus Run over five and 10 kilometers.

In March, the European Commission added asparagus cultivated around the city of Beelitz in the state of Brandenburg to the list of protected European products. Like regional German beer, gingerbread, sausages and ham, Beelitz asparagus can now proudly bear the EU seal Protected Geographical Indication (PGI).

Despite its love of the "white gold," Germany is not the world's main producer of asparagus, however — that is still China.

The gallery above explores more aspects of the country's asparagus culture. The one below takes a look at vegetables that are common in Germany, but might not be as popular elsewhere.