She continued, “The escalation of the US–China trade tensions, needed credit tightening in China, macroeconomic stress in Argentina and Turkey, disruptions to the auto sector in Germany, and financial tightening, alongside the normalisation of monetary policy in the larger advanced economies have all contributed to a significantly weakened global expansion, especially in the second half (H2) of 2018.”

Gopinath added that with this weakness expected to persist into H1 of 2019, the IMF’s World Economic Outlook (WEO) projects a slowdown in growth in 2019 for 70% of the world economy. Global growth softened to 3.6% in 2018 and is projected to decline further to 3.3% in 2019. The downward revision in growth of 0.2 percentage points for 2019 from the January projection is also broad based. It reflects negative revisions for several major economies, including the euro area, Latin America, the United States, the United Kingdom, Canada, and Australia.

After the weak start, growth is projected to pick up in H2 of 2019. This pickup is supported by significant monetary policy accommodation by major economies, made possible by the absence of inflationary pressures despite growing at near potential. The US Federal Reserve, the European Central Bank, the Bank of Japan, and the Bank of England have all shifted to a more accommodative stance, she elaborated.

Additionally, she explained that China has ramped up its fiscal and monetary stimulus to counter the negative effect of trade tariffs. Furthermore, the outlook for the US–China trade tensions has improved as the prospects of a trade agreement take shape.

“These policy responses have helped reverse the tightening of financial conditions to varying degrees across countries. Emerging markets have experienced some resumption in portfolio flows, a decline in sovereign borrowing costs, and a strengthening of their currencies relative to the US dollar. While the improvement in financial markets has been rapid, those in the real economy have been slow to materialise. Measures of industrial production and investment remain weak for now in many advanced and emerging market economies, and global trade has yet to recover, “she pointed out.

According to Gopinath, global growth in 2020 is projected to return to 3.6%. This recovery is precarious and predicated on a rebound in emerging market and developing economies, where growth is projected to increase from 4.4% in 2019 to 4.8% in 2020. Specifically, it relies on an expected rebound in growth in Argentina and Turkey and some improvement in a set of other stressed developing economies, and is therefore subject to considerable uncertainty. Growth in advanced economies will slow slightly in 2020, despite a partial recovery in the euro area, as the impact of the US fiscal stimulus fades and growth tends toward the modest potential for the group, given aging trends and low productivity growth.

While the global economy continues to grow at a reasonable rate and a global recession is not in the baseline projections, there are many downside risks. Tensions in trade policy could flare up again and play out in other areas (such as the auto industry), with large disruptions to global supply chains. Growth in systemic economies such as the euro area and China may surprise on the downside, and the risks surrounding Brexit remain heightened. A deterioration in market sentiment could rapidly tighten financing conditions in an environment of large private and public sector debt in many countries, including sovereign-bank doom loop risks, she disclosed.

“Given these risks, it is imperative that costly policy mistakes are avoided. Policymakers need to work cooperatively to help ensure that policy uncertainty does not weaken investment,” she highlighted. “Fiscal policy will need to manage trade-offs between supporting demand, protecting social spending, and ensuring that public debt remains on a sustainable path, with the optimal mix depending on country-specific circumstances. Financial sector policies must address vulnerabilities proactively by deploying macroprudential tools (such as counter-cyclical capital buffers)—a task made more urgent by the possibility that interest rates will remain low for longer. Monetary policy should remain data dependent, be well communicated, and ensure that inflation expectations remain anchored.”

Across all economies, the imperative is to take actions that boost potential output, improve inclusiveness, and strengthen resilience. There is a need for greater multilateral cooperation to resolve trade conflicts, to address climate change and risks from cybersecurity, and to improve the effectiveness of international taxation, according to Gopinath.

Risks skewed to the downside

The outlook discussed in the preceding section envisages that global growth will stabilise in H1 of 2019 and recover gradually thereafter. If the ongoing trade truce between the United States and China is resolved with a rollback of tariff increases enacted in 2018, rising business confidence and financial sentiment could lift growth above this baseline forecast.

The report shows some optimism about a positive resolution of trade differences between the United States and China is indeed already reflected in market valuations.

However, the possibility of further downward revisions is high, and the balance of risks remains skewed to the downside. Key sources of downside risk to the global outlook include trade tensions as global trade, investment, and output remain under threat from ongoing trade tensions.

The November 30, 2018 signing of the US-Mexico-Canada Agreement to replace the North American Free Trade Agreement, the extension past 1 March 1 2019 of the truce between the United States and China on tariff increases, and the announced reduction in Chinese tariffs on US car imports are steps in the right direction. However, final outcomes remain subject to a negotiation process in the case of the US-China dispute and domestic ratification processes for the US-Mexico-Canada Agreement. In addition, a proposal to raise tariffs on all imported cars and car parts remains under consideration in the United States.

Failure to resolve differences and a resulting increase in tariff barriers above and beyond what is incorporated into the forecast would lead to higher costs of imported intermediate and capital goods and higher final goods prices for consumers.

The global growth profile is shaped by projections of a recovery in the euro area as one-off factors dissipate, avoidance of a no-deal Brexit, some firming of growth in China as global prospects and policies stimulus measures take effect, and a gradual softening of growth in the United States as fiscal stimulus fades. 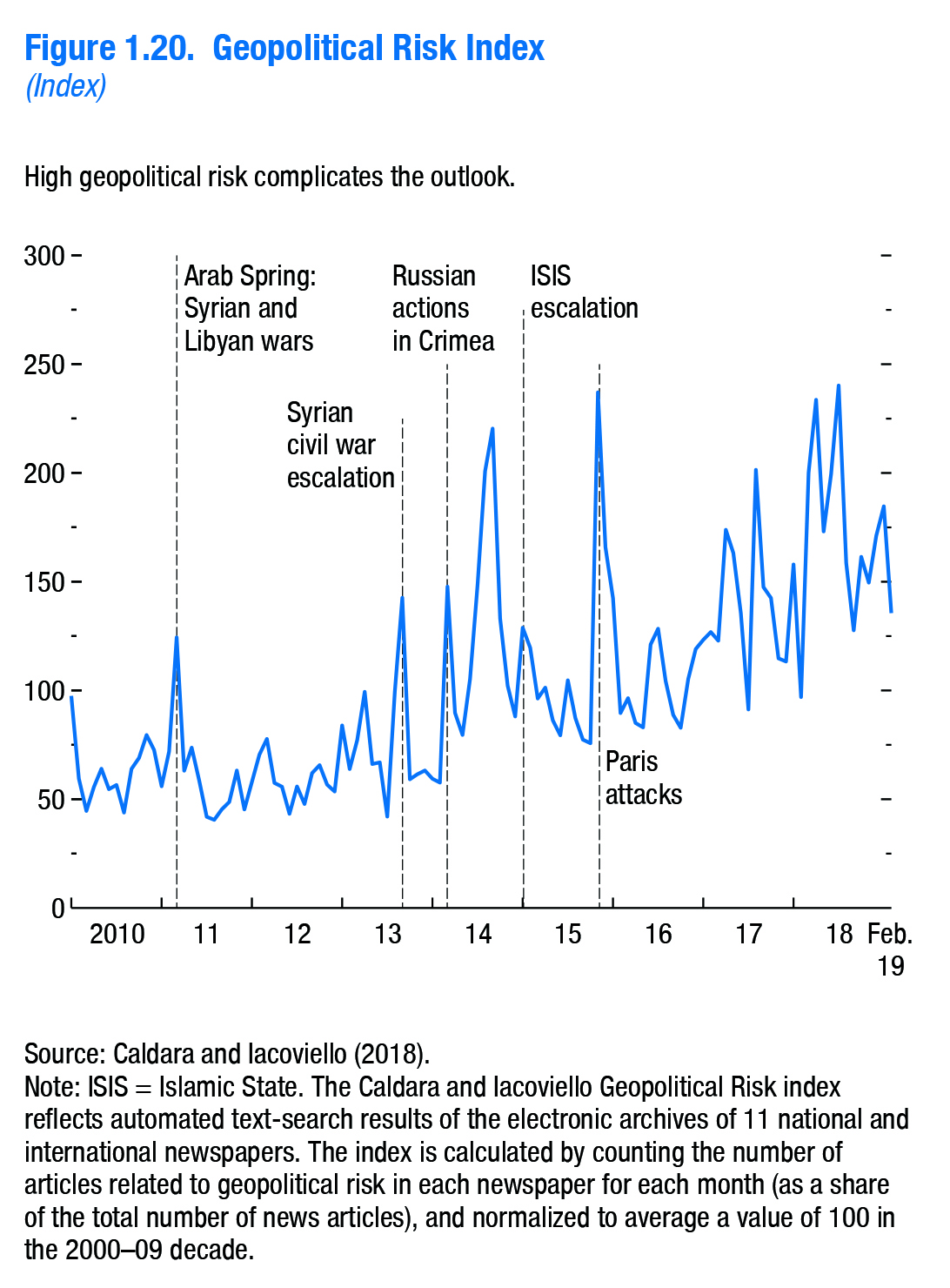 The report indicates that the materialisation of risks in these economies would lower global growth directly and through real and financial spill overs.

In Europe, a protracted period of elevated yields in Italy would put further stress on Italian banks, weigh on economic activity, and worsen debt dynamics.

Other Europe-specific factors that could give rise to broader risk aversion and a widespread increase in risk spreads include the rising possibility of a no-deal Brexit and European parliamentary election outcomes that delay or reverse progress on strengthening the euro area architecture.

In the United States, the market-implied path of expected policy rates remains below the Federal Open

Market Committee’s projections, raising the possibility of a market reassessment of the expected policy path if the US economic data remains strong.

Consequently, this could result in higher US interest rates, renewed dollar appreciation, and tighter financial conditions for emerging market and developing economies with balance sheet vulnerabilities (in the form of elevated currency and maturity mismatches).

While in China, the authorities have responded to the slowdown in 2018 by limiting the extent of financial regulatory tightening, injecting liquidity through cuts in bank reserve requirements, and reducing the personal income tax and value-added tax for small and medium enterprises.

Other financial vulnerabilities remain possible according to the report, such as cyberattacks on financial infrastructure which are another source of risk because they can severely disrupt cross-border payment systems and the flow of goods and services.

Additionally, the report cites political uncertainty as a host of other potential factors that add downside risk to global investment and growth.

These include policy uncertainty about the agenda of new administrations or surrounding elections, geopolitical conflict in the Middle East, and tensions in east Asia, according to the October 2018 WEO.

These risk factors in isolation may not have a strong impact on investment and growth beyond the countries directly affected, but a sequence of such events—combined with trade tensions and tighter global financial conditions—could have outsize effects on sentiment that reverberate on a broader scale.