Washington, DC- Thousands of delegates and officials have arrived in Washington, DC, for the spring meetings of the International Monetary Fund (IMF) and World Bank, which is taking place from 8 to 14 April.

The spring meetings of the boards of governors of the World Bank Group and the IMF bring together central bankers, ministers of finance and development, private sector executives, representatives from civil society organisations, and academics to discuss issues of global concern, including the world economic outlook (WEO), poverty eradication, economic development, and aid effectiveness.

The sessions include the influence of macroprudential policies on household credit and spending, export diversification, debt vulnerabilities, and development needs in low-income countries, managing capital flow, as well as curbing corruption by improving economic governance in the Middle East and Central Asia. In addition, the sessions also tackle the issue of illicit financial flows, money, and payments in the digital age, cyber-security, as well as tackling the next wave of the sovereign debt crisis.

During the current year’s meetings, the IMF expressed its concern regarding the decline of global economies’ growth, calling on policymakers to adjust their policies by making changes to conditions which may occur and constrain their countries’ economic growth.

The IMF Managing Director, Christine Lagarde, said on 2 April in Washington that the global economy is experiencing a “delicate moment” with increasing risks to growth and an unsettled climate.

Citing trade tensions, tighter financial conditions, and geopolitical uncertainty surrounding Brexit and other events, global growth has lost momentum, she highlighted during a speech at the United States Chamber of Commerce.

She added: “But just to be clear we do not see a recession in the near term. In fact, we expect some pickup in growth in the second half (H2) of 2019 and into 2020. And indeed, the global economy is at a delicate moment.”

The expected rebound in global growth is precarious

The expected rebound in global growth later this year and into early 2020 is precarious because it is vulnerable to downside risks, including country related uncertainties, such as Brexit for instance, and broader uncertainties such as high debt in some sectors. In some countries, tensions around trade policy are still uncertain. And there is a sense of unease in financial markets for example. There should be a sharp unexpected tightening of financial conditions. It could create serious challenges for many governments and companies around the world in terms of refinancing and debt services, particularly those that have borrowed in non-domestic currencies, which could amplify exchange rate movements and financial market corrections. Indeed, it is a delicate moment in itself and it requires a delicate mix of policies, the WEO indicated.

Additionally, Gita Gopinath, the IMF economic counsellor and director of the Research Department, stressed that policymakers need to work cooperatively to help ensure that policy uncertainty does not weaken investment.

“Now I don’t want to be overly dramatic because we don’t see a recession. But we believe that because it is so delicate as it is filled with in a way with self-inflicted wounds that only men and women can address. That’s why it requires this, ‘handle with care’ approach that brings together all domestic policies across-borders and international coordination,” Gopinath related.

According to the WEO, after strong growth in 2017 and early 2018, global economic activity slowed notably in H2 of last year, reflecting a confluence of factors affecting major economies. China’s growth declined following a combination of needed regulatory tightening to rein in shadow banking, and an increase in trade tensions with the US. 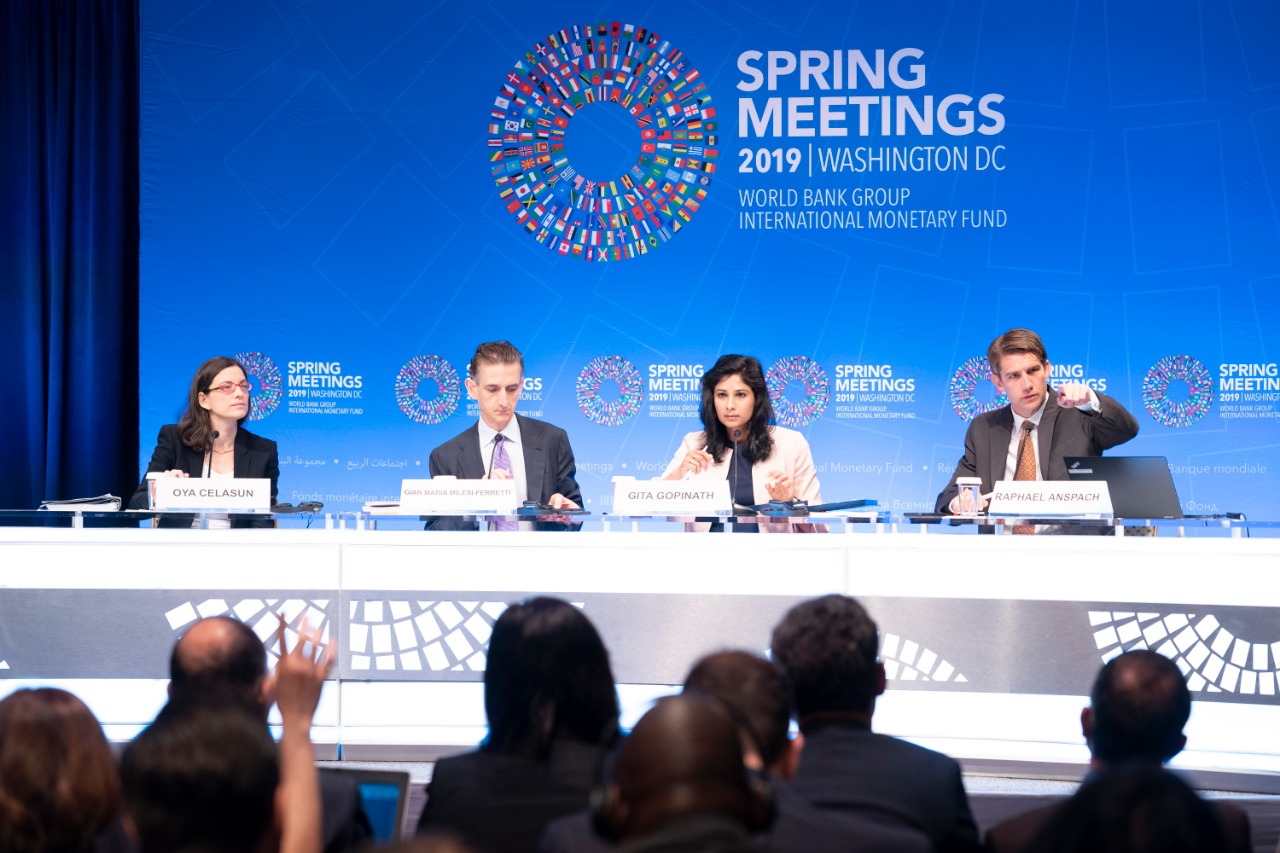 Trade tensions increasingly took a toll on business confidence and, so, financial market sentiment worsened, with financial conditions tightening for vulnerable emerging markets (EMs) in the spring of 2018, and then in advanced economies later in the year, weighing on global demand. Conditions have eased in 2019 as the US Federal Reserve (Fed) signalled a more accommodative monetary policy stance, and markets became more optimistic about a US-China trade deal, but they remain slightly more restrictive than in the fall.

The current forecast envisages that global growth will level off in the H1 of 2019 and firm up after that.

“The projected pickup in the H2 of 2019 is predicated on an ongoing build-up of policy stimulus in China, recent improvements in global financial market sentiment, the waning of some temporary drags on growth in the euro area, and a gradual stabilisation of conditions in stressed EM economies, including Argentina and Turkey. Improved momentum for EM and developing economies is projected to continue into 2020, primarily reflecting developments in economies currently experiencing macroeconomic distress–a forecast subject to notable uncertainty. By contrast, activity in advanced economies is projected to continue to slow gradually as the impact of US fiscal stimulus fades, and growth tends toward the modest potential for the group,” the WEO read.

Growth across EMs projected to stabilise slightly below 5%

Growth across EMs and developing economies is projected to stabilise slightly below 5%, though with variations by region and country. The baseline outlook for emerging Asia remains favourable, with China’s growth projected to slow gradually toward sustainable levels, and convergence in frontier economies toward higher income levels. For other regions, the outlook is complicated by a combination of structural bottlenecks, slower advanced economy growth, and, in some cases, high debt and tighter financial conditions. These factors, alongside subdued commodity prices and civil strife, or conflict in some cases, contribute to subdued medium-term prospects for Latin America, the Middle East, North Africa, and the Pakistan region, and parts of sub-Saharan Africa. In particular, convergence prospects are bleak for some 41 EMs and developing economies, accounting for close to 10% of the global GDP in purchasing-power-parity terms, and with total population close to 1 billion, where per capita incomes are projected to fall further behind those in advanced economies over the next five years.

Regarding commodity prices, global energy prices declined by 17% between the reference periods for the October 2018 and the current WEO, as oil prices dropped from a four-year peak of $81 a barrel in October to $61 in February. Meanwhile supply influences dominated initially–notably a temporary waiver in US sanctions on Iranian oil exports to certain countries and record-high US crude oil production–weakening global growth added downward pressure on prices toward the end of 2018. Since the beginning of this year, oil prices have recovered somewhat thanks to production cuts by oil-exporting countries. Prices of base metals have increased by 7.6% since August, as a result of supply disruption in some metal markets, more than offsetting subdued global demand.

Following the tightening of financial conditions in late 2018, market sentiment rebounded in early 2019. Signs of slowing global growth, moderately less buoyant corporate earnings, and market concerns about the pace of the Fed policy tightening weighed on sentiment at the end of 2018.

Consumer price inflation remained muted across advanced economies, given the drop in commodity prices. For most countries in this group, core inflation is well below central bank targets, despite the pickup in domestic demand in the past two years; in the US and the United Kingdom it is close to 2%. Although wage growth has been picking up across most advanced economies, notably in the US and the UK, it is still sluggish despite lower unemployment rates and diminished labour market slack.