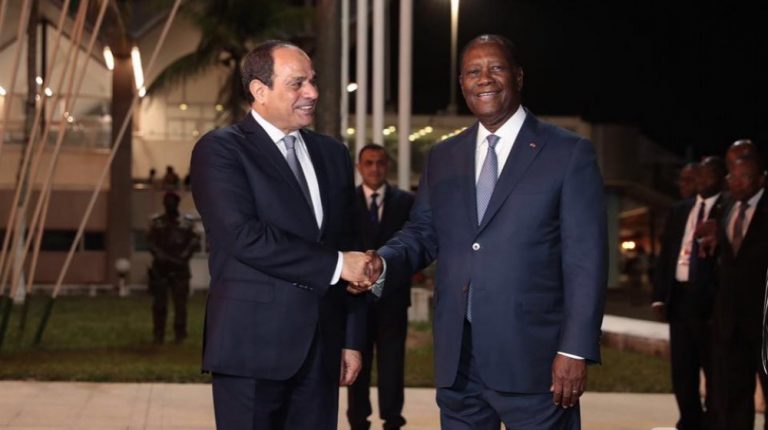 President Abdel Fattah Al-Sisi said he is proud of being the first Egyptian leader to visit Ivory Coast, adding that Cairo looks forward to fostering its political and economic ties with Abidjan, according to a statement from the presidency.

In a Thursday press conference with Ivorian President Alassane Ouattara, Al-Sisi hailed the key role played by the west African nation in raising the concerns and issues of Africa through its membership in the UN Security Council.

He went on to say his current visit, which coincides with Egypt’s presidency of the African Union (AU) in 2019, is meant to strengthen security and stability in the continent, in addition to achieving development and prosperity for the two countries.

The president noted that he held constructive talks with the Ivorian leader on means of boosting bilateral ties at the different political, economic and security levels, as well as exchanging views on several regional and international issues.

He said he agreed with Ouattara on the importance of broadening bilateral relations, through increasing trade exchange and raising the volume of Egyptian investments in Côte d’Ivoire, in addition enhancing cooperation in the field capacity-building.

Al-Sisi discussed with his Ivorian counterpart a number of agreements in the areas of tourism, culture and health, with the aim of cementing cooperation between the two countries.

President Al-Sisi pointed out that he discussed with Ouattara the possibility for making good use of the two countries’ achievements in the sector of infrastructure to link all African states to each other, with a view to establishing the foundations of trade exchange.

The two sides, also, touched on a proposal to form a joint committee to support the IT Infrastructure.

The two presidents talked about the African Union’s priorities in the current year and ways of pushing forward joint African action.

President Al-Sisi said he agreed with President Ouattara to step up political coordination between the two countries on pressing issues in the African arena, as well as the files of common concern, especially with regard anti-terrorism efforts and the post-conflict reconstruction process.