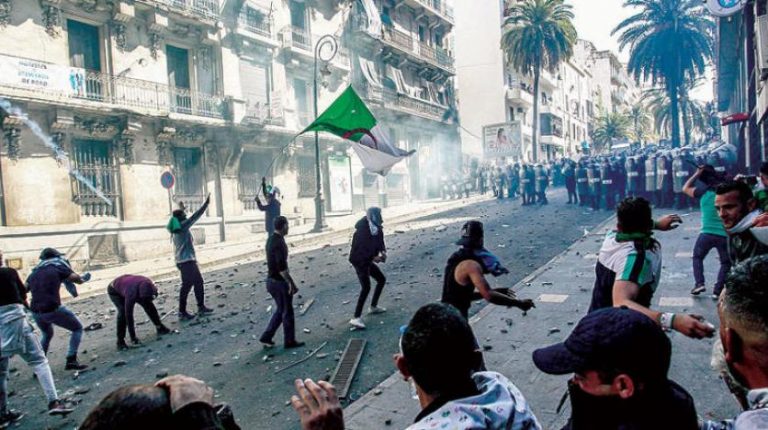 Algerian security forces have arrested 108, while 80 police officers and protesters were injured on Friday, during clashes between security forces and demonstrators who are demanding the removal of the ruling regime and interim president Abdelkader Bensalah.

Thousands of protesters gathered in Algerian streets rejecting the political course imposed by the military. Security forces used tear gas and water pumps in order to dismantle the protesters.

Protesters-who have been protesting since two months-demanded the removal of all politicians who belong to the regime of former president Abdelaziz Bouteflika, including Bensalah who was the president of the national assembly.

Ten days ago, former president Bouteflika resigned after spending nearly 20 years in power, under the pressure of the Algerian street and following the army’s orders.

Bensalah called on Tuesday for the application of the constitution and overthrowing the president as he is not capable to perform his duties.

According to the Algerian constitution, the 77-year-old president of the national assembly should succeed Bouteflika as acting president for a maximum of 90 days during which presidential elections should be held.

Bensalah said in a televised speech that he has no intention to run for the upcoming presidential election which should be held in July.

Early in April, the Algerian army’s chief of staff Ahmed Gaid Salah also called for applying the constitution and overthrowing the president as he is incapable of performing his duties.

Bensalah’s statement also criticised what he called the “establishment of enormous wealth by illegal means and in a short time, without censorship, through the proximity of some suspicious decision makers.”