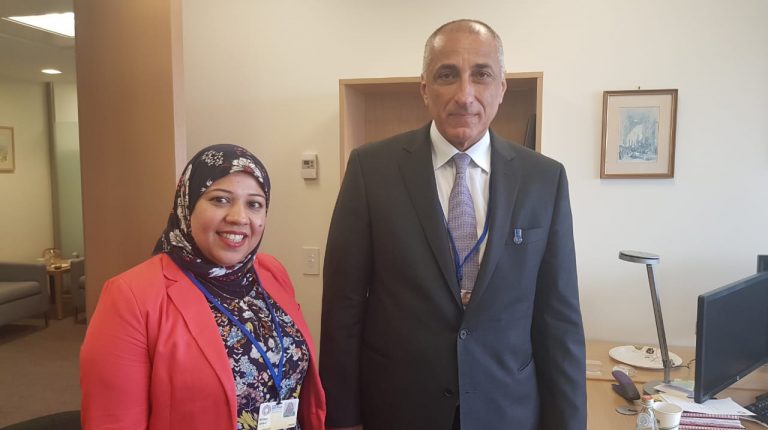 Washington, DC – Governor of the Central Bank of Egypt (CBE), Tarek Amer, said that the success of the Egyptian reform programme has exceeded all expectations according to world funding institutions.

In an exclusive interview with Daily News Egypt during the IMF and WB spring meetings in Washington, Amer said that Egypt and the fund are considering possible future cooperation, stressing that it will not be in the form of a new loan.

Amer revealed that about EGP 160bn were allocated for investment in the state’s new general budget.

He explained that the contribution of emerging economies in the world’s gross output is 60%, and Egypt is one of the most important emerging markets (EMs) in the world. “The Egyptian economy is affected by everything that happens around it not just locally,” he added.

The state needs to increase its growth rates, given the growing population and high number of university graduates, and this is why the state resorted to attracting funds from international markets, Amer added.

The CBE governor pointed out that Egypt’s foreign currencies revenues increased due to the rise of exports, remittances from Egyptian expats, tourism revenues, foreign direct investments (FDIs), Egyptian debt instruments issuances, and international loans. The state should have a diverse portfolio of foreign currency sources to attract funds and liquidity which can be used in financing development projects.

“Increased foreign debts are not a concern for us because we are developing. We have a financial model and a plan for external borrowing over the next five years. The ability to borrow from abroad differs from one country to another. According to a bulletin from the IMF, the countries which resort to borrowing are classified into weak, medium, and strong, and each country belongs to a category based on its policies, independence of policies, strength of performance, and growth rates,” Amer added.

He explained that Egypt is currently working to maintain its stability following the economic reform programme, and the government’s goal is ensuring the stability of prices, which can be achieved through increasing the ability to produce and attract foreign exchange, stressing that the reform programme has led to great successes that exceed all expectations.

He pointed out that the current policies adopted by the government contributed to maintaining the stability of the exchange rate and eliminating the informal exchange market. Additionally, they increase exports which supports hard currency and improve competitiveness of Egyptian products abroad.

Regarding the tourism sector, Amer explained that it is a key element in achieving monetary stability, hence, the stability of prices in Egypt. This is why the state must support and activate the tourism sector and consider it a strategic target, as it brings revenues estimated at $10-12bn. Egypt targets an annual tourism revenues of $20bn, and the sector’s growth will range between 10-15% annually.

Macroeconomic reforms, provision of skilled labour, quality education, adopting scientific methods in working, prioritising development, attracting foreign direct and indirect investment in government debt instruments, and initiating structural reforms are all things that should be pursued after the success of monetary and financial reforms to continue the development.

He revealed that during the past two years, the trade deficit has been reduced from $20bn to $6bn, which is a major shift. Amer added that it is important to increase remittances through stabilising the monetary policies and the exchange rate.

Foreign exchange inflows consist of dollar bonds worth about $18bn, $88bn collected by banks from sale of foreign currency, treasury bills of about $26bn, and international loans, financing received by the banks, and deposits, including the Saudi deposit, amounting to about $3bn, he explained.

Commenting on the new Egyptian Banking Law, Amer said that the new law includes rules and basics that will push development and reinforce banks’ roles in developing and supporting jobs and not just playing the role of a watchdog. The law develops banking and economic activity as well as maintaining internal stability.

Regarding supporting entrepreneurship and small and medium-sized enterprises (SMEs), Amer said that Egypt was praised for the government’s efforts to support SMEs and entrepreneurs. In addition, Amer added that an integrated independent system will be launched to support SMEs during the second half of 2019, with the participation of innovative young people and entrepreneurs through utilising the current global technological development.

He demanded from government banks to send bankers to study real estate development and funding systems abroad to understand the best international practices in this regard.

The CBE is developing a system that targets inflation. Amer added that inflation is declining in a healthy manner, as inflation is currently less than 10%, aside from the increase in the prices of fruits and vegetables.