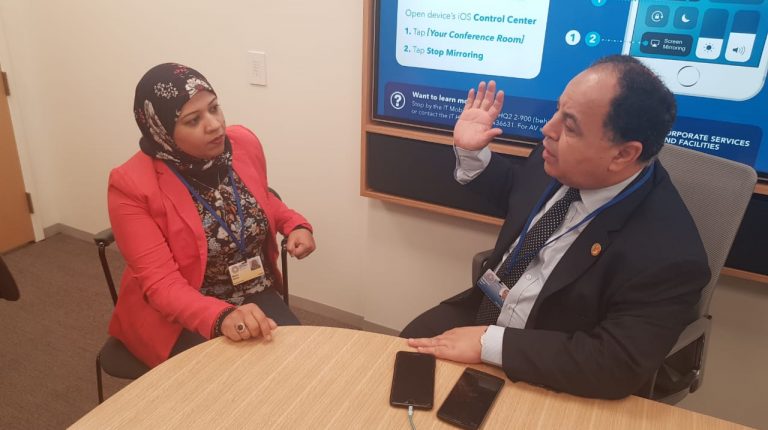 “This agreement is very important because Egypt wants to be the Egyptian domestic debt instruments part of the bank’s system that works in providing infrastructure services to financial markets through facilitating local securities’ transactions and maintaining countries’ investments, in addition to helping manage risks and issues,” Moeit told Daily News Egypt during the spring meetings of the IMF and the World Bank.

Euroclear holds €28.6tn in assets for clients. The total value of securities transactions provided by Euroclear to its clients is estimated to be more than €733tn annually.

Moeit was part of the Egyptian delegation in which the minister of investment also took part in. The delegation met with Christine Lagarde, the IMF managing director, and took part in the G20 meetings, the WB, international investors, international rating institutions, and ministries of some countries.

Furthermore, Moeit pointed out that all institutions and countries praise Egypt and see it as a main player in the world. Some Arab countries now consult with Egypt and ask for its aid in implementing their own reforms.

He predicted that Egypt will receive the last tranche from the fund’s loan of $2bn in July, after the final review process is finalised in late May or early June.

In addition, Moeit revealed that the Egyptian government has not requested additional funding and that there is no intention to request more funding, explaining that cooperation with the IMF continues through technical missions and consultations, expecting by 2030 to see Egypt’s economy one of the largest 10 economies in the world.

He pointed out that Egyptians have already overcome the catastrophic stage. “We are still in the recovery process and we are working hard. The most important results of these austerity measures are the stability of the local currency, the low interest rate, the state’s ability to fund salaries, pensions, health insurance and healthcare,” he explained.

Moreover, he also revealed that the state has achieved an increase of 40% in public investments. It also launched many projects which generate jobs and meet the needs of citizens.

Despite the suffering of Egyptian citizens regarding prices being equal to salaries, this still remains a small aspect of the problem, however, the state’s ability to provide basic necessities is much more important, explaining that a real issue would be if citizens have the money but cannot find available the commodities they are looking for.

Moreover, he explained that Egypt has made an achievement in terms of reducing the total deficit in the general budget of the state, achieving a decline in the level of public debt from 108% to 98% of the GDP. He also expects it to drop to 93% in June, and then reach 89% in fiscal year (FY) 2019/20.

Regarding imposing new taxes to provide social protection for those with a less than average income, Moeit said there will be no new taxes imposed in FY 2019/20, adding “When we implement a particular policy, we take into account the social dimension and we seek to strengthen the value of the Egyptian pound now. It is not easy, but we will continue the reforms to stabilise the local currency. “

“There are no concerns about the debt rates because the budget’s items also see a decline in the value of the debt service, which amounts to about EGP 569bn in the state budget for FY 2019/20, compared to about EGP 541bn in the current FY.”

On lifting subsidies, Moeit said that tax revenues must be directed toward funding education and healthcare. He added that petroleum products and electricity subsidies have cost the state EGP 150bn at the expense of other mains sectors. “With only EGP 30-40bn, education and the salaries’ and wages’ system can be reformed,” he said.

Over and above he explained that the recovery policies adopted by Egypt include preparing for new economic crises that may occur in emerging markets because in the second half of 2018 Egypt was hit by several shocks and crises which led to an increase in interest rates and petroleum prices, in addition to foreigners exiting investment in Egypt. “We need to have a larger capacity to accommodate shocks and have a well-functioning economy to deal with new crises,” he added.