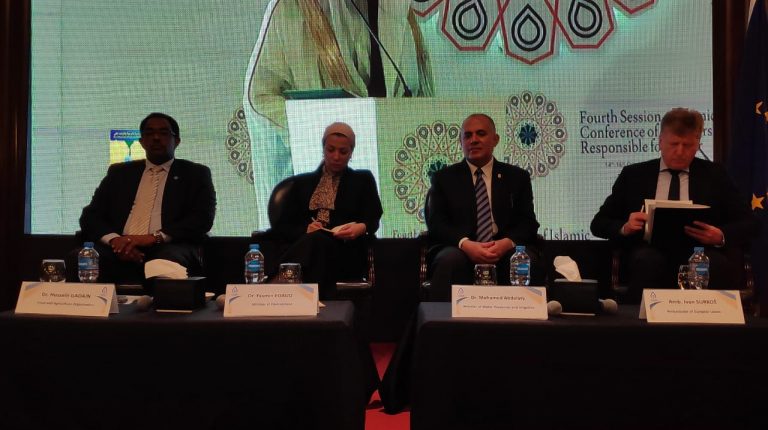 The Minister of Water Resources and Irrigation, Mohamed Abdel Aty, launched on Sunday the preparatory meetings of the second Cairo Water Week (CWW), under the ‘Responding to Water Scarcity’ theme.

During his speech and the launching ceremony, Abdel Aty reaffirmed that Egypt is facing water scarcity, and that there is a serious need for mutual understanding between countries about water issues. He added that “We need better management for water resources in order to achieve the security of energy, water, and food.”

The minister noted that the Arab region and Africa are facing serious challenges regarding water scarcity due to environmental problems and overpopulation.

The second CWW will be held in October under the auspices of President Abdel Fattah Al-Sisi. The CWW is an annual event aimed to promote water awareness, foster new thinking around the most pressing water-related challenges, and to take action toward comprehensive management and conservation of water resources.

Abdel Aty added that the CWW will focus on beneficial practices in saving water and will honour farmers who used correct practices in irrigating their lands and utilised modern technologies.

Furthermore, he praised the level of cooperation between his ministry and eight other ministries involved in the water issue, as well as parliament which was effective in legislating laws that helped in reducing water waste, such as the rice legislation which limited the farming rice area. The ministry is also open to cooperating with scientific research centres and universities.

Egypt’s Ministry of Water Resources and Irrigation will organise the event, in cooperation with national, regional, and international partners. Over 500 participants from different countries are expected to take part in the second CWW.

Abdel Aty said that the week will be covered under five sub-themes: achieving the sustainable development goals under water scarcity; cooperation in the water sector; research and innovation when facing water scarcity; climate change impact mitigation and adaption, and unconventional water resource usage under scarcity conditions.

Head of the European Union (EU) Delegation to Egypt, ambassador Ivan Surkoš, said in his speech, “Last year we launched together the first ever CWW which was a huge success from day one, and become the biggest water-related event in Egypt.”

He added that the EU has a long-lasting commitment to support sustainable water management through its cooperation with key partner countries in several aspects. This includes policy dialogue, development cooperation, and multi-stakeholder partnerships through a strategic approach to local and regional development.

Moreover, he stated that the EU will continue to further engage with regional institutions and organisations, national and local authorities, communities and civil society to this end, particularly as regards drawing on existing best practices and initiatives, including from existing international centres which benefit from EU funds, because the water sector is a top priority for both the EU and Egypt.

Meanwhile, the Minister of Environment, Yasmine Fouad, stressed the importance of focusing on climate change impact on water resources, and the need for cooperation nationally and internationally in this regard. She referred to Egypt’s efforts in mitigating and adapting to the impacts of climate change.

For his part, Hussein Gadain, the representative of the Food and Agriculture Organization (FAO) of the United Nations  in Egypt, said that the organisation is a main supporter of the CWW ever since its first edition, held last year.

Speaking to Daily News Egypt, Gadain said that 14 countries in North Africa and Middle East are expected to face water scarcity including Egypt, where the water per capita will be decreased to 300m3 by 2030. He stressed the importance of cooperation between countries sharing water resources in saving and using these resources sustainably.

Egypt is our most important neighbour in Southern Neighbourhood: EU delegation