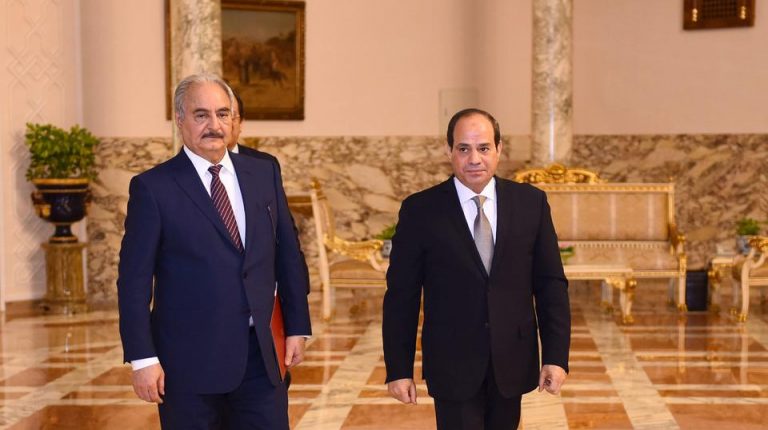 Forces affiliated with Haftar have engaged in violent clashes with militants in the outskirts of Tripoli since last week.

According to a statement from the Egyptian presidency, the two leaders discussed the latest developments in Libya, where Al-Sisi asserted Egypt’s keenness on Libya’s stability.

Al-Sisi said that Egypt supports Libya in the ongoing operation to “achieve security and stability for the Libyan citizens, which will end up in the ability to enhance political life in the neighbouring country.”

At least 121 people were killed in clashes between rival militias fighting for control of Libya’s capital, the World Health Organization (WHO) said on Sunday.

The WHO said in a tweet that 561 others have been wounded since Haftar launched the offensive earlier this month to take Tripoli, which is currently controlled by the UN-backed Government of National Accord.

In another earlier tweet, the UN agency denounced “repeated attacks on health care workers and vehicles” during the fighting.

Earlier this week, the UN said the fighting had displaced more than 8,000 people.

Eastern Libyan forces will pursue their advance on the capital Tripoli, the Tobruq Parliament President, Aguila Saleh, said on Saturday.

On one side, an anti-Muslim Brotherhood bloc

The indigenous Tebu and Tuareg tribes, which started fighting each other in 2014, have overcome past grievances to unite against Haftar, however they switched sides later, and supported Haftar operations in southern Libya.

Islamist bloc
On the other side, Qatar and Turkey have supported various Islamist factions in Libya, including the Muslim Brotherhood-linked militias from Misrata.

The Libya Dawn militia alliance that formed partly in response to Haftar’s Operation Dignity in summer 2014.