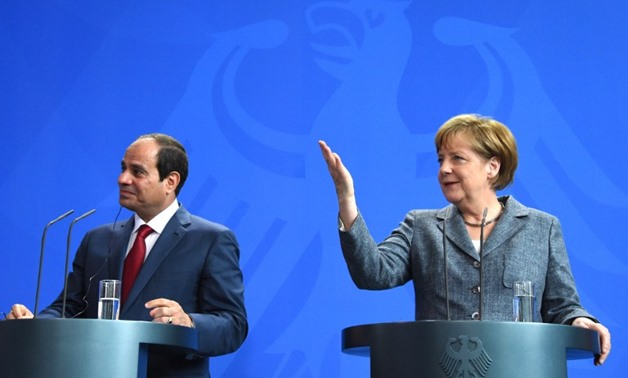 During the conversation, Al-Sisi affirmed that Egypt is closely following the developments in the neighbouring country in the light of their strong and historical ties and the importance of Sudan in its regional and international scope.

He also asserted that Egypt’s support for the Sudanese people’s choices based on Egypt’s steadfast stance on full respect for its sovereignty and non-interference in its internal affairs. He also stressed the importance of intensifying international efforts to help Sudan emerge from its crisis and maintain its stability and security for the benefit of the Sudanese people.

On the other hand, Merkel stressed her keenness to listen to the president’s vision regarding the latest developments on the Libyan arena, in view of Egypt’s active role in the region as well as its current chairmanship of the African Union.

Also, Al-Sisi affirmed Egypt’s position on supporting the unity, stability, and security of Libya, as well as counterterrorism efforts as the extremist groups pose a threat not only to Libya but also to the security and stability of the Middle East and the Mediterranean region.

For her part, Merkel explained her country’s adherence to the political solution in Libya within the framework of peaceful dialogue. Both sides agreed on the need to intensify the international efforts to work towards the speedy end of the Libyan crisis, which helps stop the deterioration of the situation.

The phone call also dealt with some issues related to bilateral relations, in view of the growing level of these relations during the recent period. Merkel stressed Germany’s keenness to develop joint cooperation with Egypt in various fields.

The president also expressed his aspiration to continue to promote and develop the distinguished relations between the two countries at all levels.

Opinion: An anti-Semite in the Chancellery? Emil Nolde must go!

Germany's atomic phase-out: How to dismantle a nuclear power plant