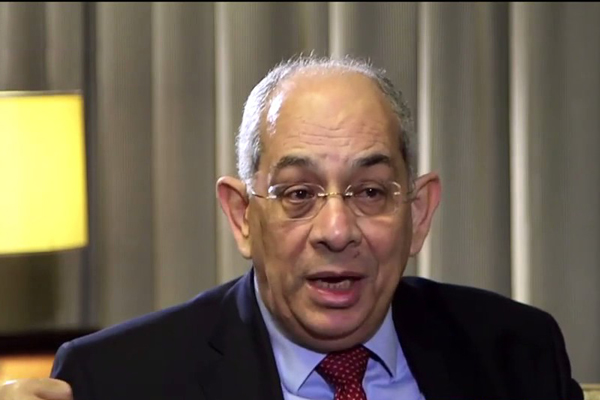 Washington, DC- Youssef Boutros Ghali, former Egyptian finance minister, said Egypt is not in need of another loan from the International Monetary Fund (IMF) but the country’s government, though it is not weak, needs competencies and experienced people which is much more important than financial resources.

Ghali elaborated: “The IMF’s procedures are difficult but necessary, and the Egyptians absorbed the shock, but we have to concentrate on other important issues now.”

Daily News Egypt interviewed Ghali to discuss his perspective regarding the assessment of Egypt’s economic reform programme, the transcript for which is below, lightly edited for clarity:

How do you view the IMF programme and to what extent did it succeed?

The IMF programme in Egypt has produced positive results, but at the expense of the poor. It is necessary to deal with the fund from an Egyptian point of view, and the recipe cannot be taken as it is, to ensure that the poor do not suffer. However, the IMF is not tasked with verifying the adherence of the poor, but it is tasked with re-establishing the financial balance of countries that are in trouble. Most governments that are in trouble resort to borrowing from the IMF. The fund recommends some measures for these countries, and they have the right to approve or reject them.

Do you think that Egypt needs a new IMF loan or extend the current one?

Egypt has the ability to discipline itself and adhere to the economic reforms without the need for another loan from the fund. President Al-Sisi has the firmness and ability to do what he wants, and he does not fear reform, but he needs help from the government and his ministers. Egypt is not in need of another loan from the IMF because Egypt’s government is not weak, but it needs competencies and experienced people, which is much more important than the presence of financial resources. The fund’s procedures are difficult but necessary, and we absorbed the shock but we have to concentrate on other important issues now. The IMF expected in its World Economic Outlook (WEO) in April 2019 that the Egyptian economy will grow by 5.5% this year, and by 5.9% in 2020.

How do you see the performance of the administrative body in Egypt?

The administrative body in Egypt are still suffering from some bureaucracy that may affect the smooth inflow of foreign direct investments (FDIs). On the application of the one stop shop recently in Egypt, I think that the country needs some time to implement it, but it is not presently effective, which may have a significant impact on FDIs. The idea is not to create a single window for all competent authorities, but rather to facilitate the procedures for investors through a single authority or agency, and not a single window. And, since many agencies do not want the withdrawal of any authority from them, this is the main cause of the problem of multiple procedures and bureaucracy.

Do you think that there will be an imminent devaluation of the pound?

I do not think there is a future depreciation in the exchange rate, so there is no need to move prices, as I believe it will be stable. I see that our problem in Egypt is not how we lower prices, but how we provide incomes to face the high prices and inflation.

How would the receding global economy affect Egypt’s growth?

The problem facing economists today is that all indicators in all countries which lead world growth are negative, therefore there is nothing to prevent the global economy from deteriorating. Hence, there is fear that global growth rates will continue to decline, which will have a significant impact on the Egyptian economy because it is a member of the global economy and the country’s FDIs will be lower.The IMF’s WEO, which was released early last week, projects a slowdown in growth in 2019 for 70% of the global economy. Global growth softened to 3.6% in 2018, and is projected to decline further to 3.3% in 2019. The downward revision in growth of 0.2 percentage points for 2019 from the January projection is also broad based. It reflects negative revisions for several major economies, including the euro area, Latin America, the United States, the United Kingdom, Canada, and Australia.

What is the solution?

The solution is to activate economic recovery policies at the level of countries and complement each other in different countries. China, for example, has a declining growth rate, thus it has not depended on export development to revive its economy because its export development will reflect on another country, therefore the external sector will pressure the domestic economy, but it has to encourage its domestic consumption. Germany, too, has a surplus in its public budget, and it has to turn it into deficit to encourage consumption which would stimulate other European and developing countries. The current discussion is to follow policies to restore growth rates so as to become homogenous among different countries, which requires coordination between these countries’ decision-makers. These policies’ success depends on the knowledge of the problems and the procedures required to resolve them. Second, is knowing other decision-makers and the convergence of state policies.

What are the promising economic sectors in Egypt?

Tourism sector is one of the Egyptian sectors that has started to recover recently but it is taking some time to reach 2010 levels. I expect the Egyptian real estate market will witness a significant deceleration in the coming period, but the demand will continue because it is a safe haven for investment in light of the deterioration of individual investments in some other sectors. With regard to the new oil discoveries, I think that the energy sector is the most promising in terms of attracting FDIs and applying the mechanism of one stop shop.

How do you see the performance of the Egyptian economic ministerial group?

Some Egyptian ministers are consulting me on a few economic issues. Nevertheless, the ministers in Egypt must work together. The economic group under Mubarak’s era was homogeneous and cohesive. I had an insight into the period of my ministry through moving to take precautions before facing several economic problems in the presence of the political will, rejecting any change, or movement in prices at the time.

How do you deal with the cases filed against you?

I’m working on these problems and I hope to return to the country. By the way, I did not exploit the printers of the ministry of finance in the service of my election propaganda in 2010.

Prosecutors’ investigations said that Ghali took advantage as a finance minister to exploit the printing centre of the ministry of finance to print large quantities of electoral advertising materials for his candidacy for parliament in 2010.

In February, the Cairo Criminal Court sentenced him to 15 years in prison in absentia and required him to return EGP 35.8m to the government. Ghali has not returned home since he fled to Britain in 2011 after mass protests toppled Mubarak’s regime and his cabinet. He was consequently fired from his position over charges of corruption and abuse of power.
The former finance minister requested a reconciliation deal with the government, after which the Illicit Gains Authority (IGA) formed a committee, and estimated his wealth at EGP 300m with unexplained inflation. Ghali rejected the value as incomprehensible for not including salaries of his previous jobs as economic advisor for the cabinet during the period from 1986 to 1998, as well as an advisor for the United Nations office in Cairo for 10 years, where he was paid in dollar.

US dollar loses 5 piasters against Egyptian pound on Wednesday

Living abroad is hard, I wish to come back to Egypt: Ghali

We are faced with monumental challenges: Mehleb