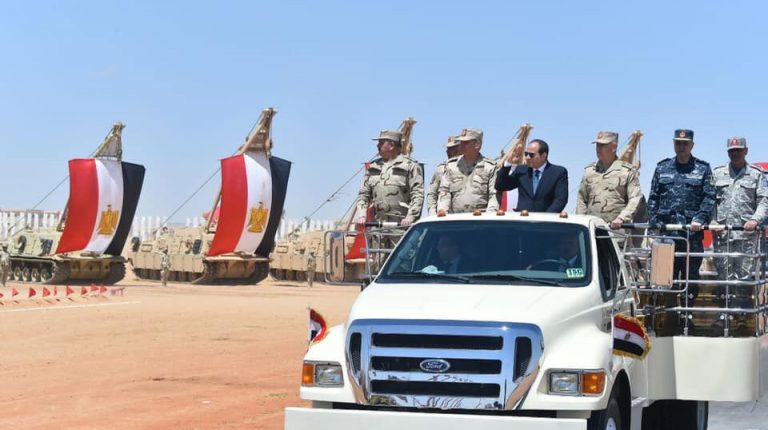 Egyptian President Abdel Fattah Al-Sisi inspected on Tuesday the Mohamed Naguib Military Base, the state-owned newspaper Al-Ahram reported. Al-Sisi visited the base to check its inspection’s procedures and the fighting efficiency at the military base, the newspaper clarified.

During a ceremony held on Tuesday, Al-Sisi watched a documentary prepared by the army called: ‘The Armed Forces: a shield and a sword.’ The documentary contained a brief of the military base and its history and battling fields, which qualify it enough to host several drills between the Egyptian army and other countries’ armed forces.

Meanwhile, the commander of the Northern Military Region, Major General Ali Adel Ashmawi, said that the military officers and soldiers are willing to sacrifice their lives for their country. Ashmawi pointed out that the Naguib Military Base has become a destination for brotherly countries to carry out joint military exercises.

Furthermore, Ashmawi asserted that from the beginning, Egypt chose the path of peace to tackle the crises and move on toward reconstruction and stability, which all peoples around the world seek.

Subsequently, Al-Sisi, accompanied by top military commanders and a number of students from Egyptian universities and military institutions, took a round to inspect the forces and ensure its readiness for different missions.

The ceremony was attended by Prime Minister Mostafa Madbouly,  Commander-in-Chief General Mohamed Zaki, top military commanders, Pope Tawadros II of Alexandria, as well as a number of ministers and public figures, according to Al-Ahram.

The Mohamed Naguib Military Base, located in Al-Hammam city, west of Alexandria, is one of the largest of its kind in the Middle East and Africa.