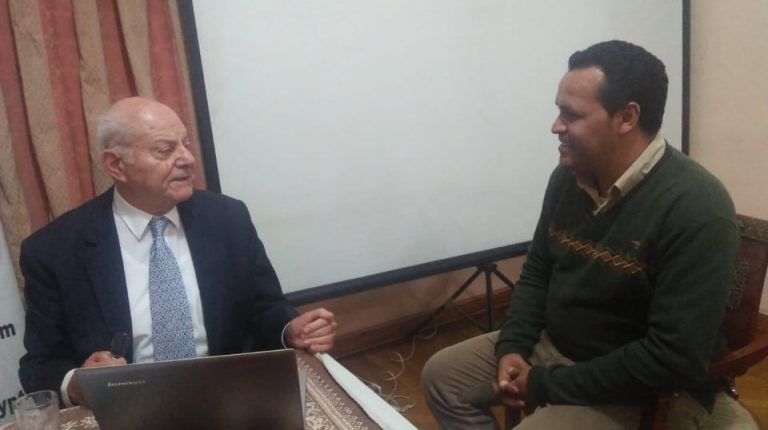 Global renewable energy expert Hany El-Nokrashy, the son of Mahmoud Fahmy El-Nokrashy, Egypt’s former prime minister during King Farouk’s reign who was assassinated by the Muslim Brotherhood in 1948. Hany El-Nokrashy inherited a vendetta against the group which made him pray to God that MB fall when they came to power.

El-Nokrashy has a vision to generate energy in Egypt from heat available in deserts. It is a clean source of energy that can supply Egypt and the world with energy needs, away from coal and its negative environmental impact.

He is also a member of the president’s advisory council of Egypt’s scientists and experts, which includes the most prominent scientists in all disciplines and fields. This council is charged with studying the files of national projects and development in all state sectors.

The advisory council was established in 2014, but it has not made headlines since then. Has it been dismantled?

No, it is still ongoing. We meet periodically but we have no expertise with the media or public relations. It is not a priority for us. We have a specific task: to provide the required advice to the state in all matters related to scientific issues and development projects. We have specific mandates from the president, the most important of which is studying the government’s visions regarding Egypt’s future since the beginning of the council’s formation. This comes after we have identified the most important issues which represent an obstacle or a stumbling block in the development process, and the need to deal with them and solve them.

What are the most important obstacles the council has identified?

All of us in the council unanimously agree on the priority of reforming education, because it is the greatest stumbling block and enfolds our renaissance.

Does this mean that you are involved in education development now?

Of course we are. The president was interested in the recommendations we provided, and he forwarded them to the Minister of Education Tarek Shawky. The minister has a great and positive vision that has already been presented to the members of the advisory council and we recognised the quality and validity of its implementation in Egypt. He already began to implement his new plan for developing education.

And when can we see the results of this plan?

The final results will appear in 20 years. The initial results of educational development will appear in a few years. We are working on a long-term plan, which is what developed countries do in such files.

Regarding the energy sector, do you have any comments on the previous government’s performance?

The main reason was its lack of interest in benefiting from the renewable resources of energy available in Egypt, especially solar energy which God gave us in abundance. Meanwhile, it was purchasing coal, which I objected for many reasons. Coal is expensive to import and its environmental impact and carbon footprint are terrible. We also achieved new gas discoveries, so we should limit the use of coal.

Where are the best locations for establishing solar plants in Egypt?

Aswan is a typical choice for us, for the availability of solar energy there as well as the purity of its atmosphere, which means pure sunlight more than any other place.

How many solar power plants should we have to achieve energy self-sufficiency?

The capacity of a solar power plant should not be less than 20MW to be feasible. I think it is necessary to standardize capacities of power plants between 20-50MW to recover costs in five to six years. I also think we should focus on establishing small stations and link them in sub-networks to provide energy to small villages or cities in the desert. This would enable us to close one or more plants for maintenance in winter when consumption declines by 20%. When the summer begins, these stations can resume work at full capacity. This proposed system supersedes the unified grid and ease the load we suffer during peak hours as we would rely on internal sub-networks.

This is true, but considering the subsidy cost paid by the government annually which is large, the total cost would be reflected on the final price of selling electricity, which is currently subsidised. To identify the real price, we have to calculate it without the value of fuel subsidies. That way it will then come in favour of solar power plants compared with the cost of energy from traditional plants, which will be realised in the first period of repaying debts, especially considering that the government or investors do not have enough funds to build new stations, but rather borrow their cost from banks with high interest rates and repayment period up to 20 years. Meanwhile, solar power costs in 20 years will drop by one-third due to saving fuel, compared to traditional stations with same capacity and performance. It also enables us to repay loans, as the cost of electricity from a traditional station will drop from $0.095  (about EGP 1.56) to $0.085 (about EGP 1.39) while the cost of electricity from thermal power stations will be $0.01 (EGP 0.17) which is the lowest price for electricity in the world in the first 20 years of building the stations. It means we will not bear any additional costs, except for wages, spare parts, and maintenance.

Can we manufacture thermal stations in Egypt?

Only 7% of these stations’ components can be made in Egypt, including mirrors and their holders, and we will import other components.

Have these studies been submitted to the president or competent authorities?

The ministry of electricity is concerned with this file, and it is clearly heading toward volatile renewable energy (wind and photovoltaic panels), although it does not give us 24-hour energy continuity and the costs of generation or storage are high due to the reasons I mentioned earlier. They are also going for coal-fired power plants as they are the cheapest option, although, in reality, considering the high cost of the machinery and the negative impact of its pollution effect and health impact, it is by far not the cheapest.

Do we have experience in establishing thermal plants?

The first thermal power plant was built in Maadi in 1912 by an American engineer and was actually operational in 1913, with the aim of raising the Nile water to irrigate the cotton crop as an important crop at the time. However, given the British control of the Egyptian economy at the time, they saw that this station would save Egypt from importing coal from England. They seized the chance of the first world war, broke and closed the station, and dismantled it components and then sold them. But this is easy as Egyptian scientists worldwide are working on this file.

How do you see power projects recently implemented in Egypt?

What has been achieved in the energy file is a very big leap because the years before president Sisi witnessed a negligent failure to build electric stations. It might have been for a lack of resources or the steady market increase and social development due to the increasing population and its electricity requirements. The electricity current was disturbed several times. When president Sisi took office, he changed this painful reality and raced against time to sign agreements with major companies to build several stations– thus reducing the cost of establishing individual stations.

How do you assess the electrical connection projects in surrounding countries and Europe?

Egypt will, of course, benefit from the export of a high-value product, namely electricity instead of exporting gas, which will be of great benefit to us. The most important was the fossil fuel power station developed by the German company to reach a 61% efficiency standard. This is a significant amount in converting the thermal energy stored in gas when it is burned into electrical energy. In order to estimate the worth of this value, it is enough to compare it with the efficiency of conventional power plants globally which operate with oil or coal, ranging between 30-40%, or about the half.

Far from scientific matters, and as the son of the former Egyptian prime minister, how do you view the Brotherhood?

My father hated the British colonialism and was known for this. And this is the reason they assassinated him, unlike the Brotherhood who was established by the colonialists and was used as their tool. When they came to power in Egypt, I knew they would fail because they were not accustomed to public work. I prayed to God that they fall until 30 June incidents saved us from them. This was natural, and their terr acts that followed were expected.