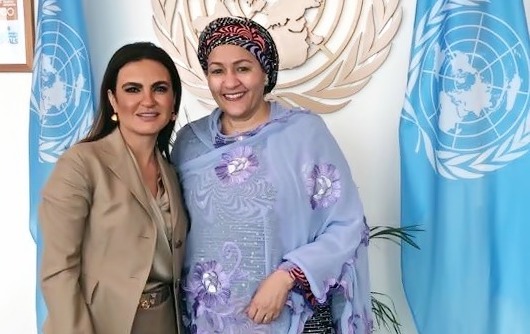 The United Nations deputy secretary general, Amina Mohammed, discussed with Egypt’s Minister of Investment and International Cooperation (MIIC), Sahar Nasr, the activation of a strategic partnership agreement until 2022, by which Egypt would receive $1.2bn funding.

Egypt’s economic reform programme contributed in enhancing the economy, which was obvious through the positive indicators over the past period, Mohammed stated.

Egypt plays an international and regional strategic role in line with its presidency of the African Union (AU) which will boost the joint cooperation in the continent, she added, noting that the UN considers Egypt as a pioneering country in successful economic reform.

For her part, Nasr said that the Egyptian government focuses on boosting its partnership with the private sector in many developmental projects, pointing out that the authorities are implementing several regulatory reforms to enhance the country’s investment climate.

The government pays great attention to the social side of the reforms and offering the support to the neediest categories, the minister affirmed, noting, “We always try to make sure that the neediest people are receiving our direct and indirect support. We have several initiatives in this regard.”

Nasr called on the UN to focus more on the neediest areas in Egypt, reassuring the importance of the joint partnership with the UN, the statement mentioned.

Nasr also called on the international community to tackle the challenges that face increasing African countries’ economic growth, affirming the importance of the elimination of technology transfer barriers in developing countries.

Egypt will support African countries’ regional integration throughout its presidency of the AU, making sure that the private sector is well-involved in the developmental process, Nasr added.