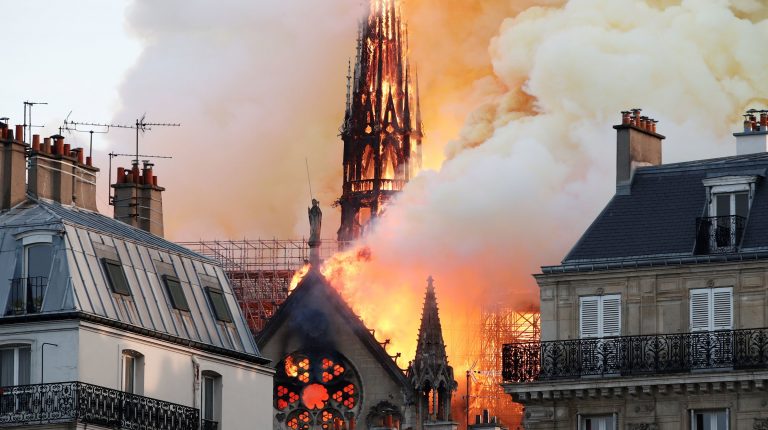 Egyptian President Abdel Fattah Al-Sisi has voiced his sorrow over the massive fire which erupted at the Notre Dame Cathedral in Paris, describing the tragedy as a “terrible loss for humanity.”

Earlier on Monday, a huge fire erupted at the historical Cathedral. Footages of the flames spread on social media with millions of sympathetic comments and tweets from different parts of the world. The fire damaged the roof and the spire of the ancient building.

At the same time, millions of social media users continue to re-share the photos of their visits to the cathedral, expressing their grief over the catastrophe.

French prosecution is carrying out an investigation into the incident, however, the causes of the fire have not been revealed yet.

“I received with deep sadness the news of the fire at the ancient spire of the Notre Dame Cathedral,” Al-Sisi tweeted on Monday. “It is a great loss for humanity,” Al-Sisi added, expressing his solidarity with France and its people.

Meanwhile, Pope Tawadros II of Alexandria also expressed sorrow for the “great loss”, sending his condolences to the French people.

Worldwide, leaders expressed their sadness over the tragedy. Donald Tusk, the President of the European Council (EU), called on all 28 States of the EU to help France in rebuilding the cathedral. “I’d like to say words of comfort and solidarity with the French nation, also as a citizen of Gdańsk, 90% destroyed and burnt, later rebuilt. You will also rebuild your cathedral,” Tusk tweeted.

For French President Emmanuel Macron, he said: “We’ll rebuild this cathedral all together. It’s undoubtedly part of the French destiny and the project we’ll have for the coming years.”

The United States President Donald Trump tweeted: “So horrible to watch the massive fire at Notre Dame Cathedral in Paris. Perhaps flying water tankers could be used to put it out. Must act quickly!” Trump then tweeted: “God bless the people of France!”

Meanwhile, British Prime Minister Theresa May tweeted: “My thoughts are with the people of France tonight and with the emergency services who are fighting the terrible blaze at Notre-Dame Cathedral.”

Notre-Dame de Paris or Notre-Dame Cathedral is a medieval Catholic Cathedral. More than 13 million visitors across the world  visit the historic building annually, as it is one of the most widely recognised symbols of the capital and the whole country.

Lights go off around globe for Earth Hour