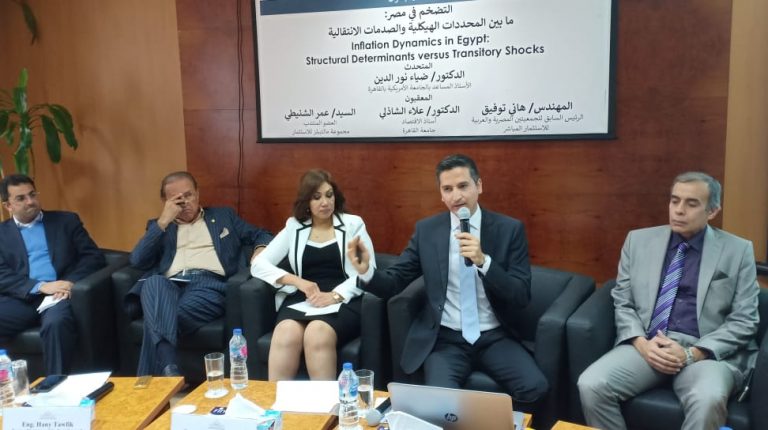 His remarks came while presenting the results of a study prepared in cooperation with the Egyptian Center for Economic Studies (ECES) team, which aim to reveal the reasons behind the upward trend of Egypt’s inflation.

Noting that, the main reason for the inflation in Egypt is the price shocks such as exchange rate liberalisation or higher energy prices,” he added during a seminar entitled ‘Inflation in Egypt: Between structural determinants and transitional shocks,’ which aims to discuss the structural causes of inflation in Egypt for many years, in the presence of a group of economists and experts.

The study pointed out that by comparing the situation of Egypt with 84 countries around the world, it will be revealed that Egypt is considered as one of the highest countries in the relative price changes, and the highest in the money growth, as well as inflation rates, during the period from 2011 to 2018.

The study assured the need to establish rules for the state’s public finances such as limiting public debt, as well as the budget deficit.

For his part, former head of both the Egyptian and Arab Direct Investment Associations, Hany Tawfik said that the inflation witnessed by Egypt since 2016 was not due to increased demand but because of the price jump. Therefore, it was not correct to increase interest rates to target declining inflation.

Executive Director and Director of Research of the ECES, Abla Abdel Latif, agreed with Tawfiq that tackling the inflation resulting from increasing prices, by increasing the interest rate was a mistake, assuring the need for institutional reform and laying down clear rules for the state’s public finances.

Notably, Egypt’s inflation rates have sky-rocketed since the currency floatation that took place in November 2016, reaching a record high of 35% in July 2017, following the second wave of energy subsidy cuts, and has been gradually decreasing since then.

Meanwhile, the Central Bank of Egypt (CBE) said that Egypt’s annual core inflation softened to 8.9% in March, down from 9.2% in February 2019.