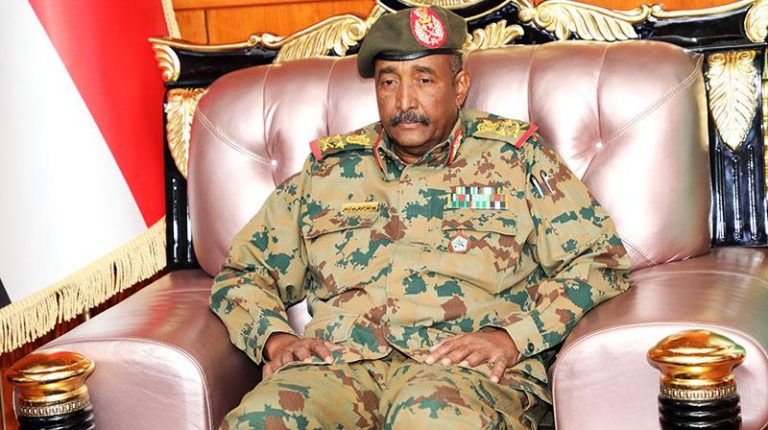 The delegations voiced their countries’ support to the Sudanese people through such historical time. During the meeting, Burhan praised the relations between both Saudi Arabia and the UAE and the longstanding bonds between them.

Meanwhile, an Egyptian high profile delegation is paying a visit to Sudan on recent updates in the country, state-owned newspaper Al-Ahram reported on Wednesday.

Earlier this week, Saudi Arabia announced its support of the decisions taken by the new military council, pledging to supply the country with an assistance package of food, medications, and oil. Meanwhile, the UAE welcomed the appointment of Burhan, and also vowed to coordinate with Sudan on needed aids.

In a phone call with Burhan, Al-Sisi asserted his respect and support to the will and choices of the Sudanese people in drafting the future of their country and in maintaining the state’s institutions.

Furthermore, Al-Sisi emphasised Egypt’s readiness to provide all forms of support to the brothers in Sudan, emphasising the longstanding bonds that the two peoples of the Nile Valley share.

During the call, Al-Sisi was briefed by Burhan “on the development of the situation in Sudan and the transitional military council’s efforts to deal with the current situation,” Rady said.

Earlier this week, Burhan led the council after the Defence Minister Awad Ibn Auf stepped down following a wide public rejection over his leadership of the council. Upon assuming the post, Burhan ordered the lifting the night curfew and releasing all political detainees apprehended under the state of emergency following the ouster of former president Omar Al-Bashir.

Reports were circulated on Tuesday that Al-Bashir was transferred to Kobar prison in the capital Khartoum. He has been under house arrest since he was overthrown by his military.

Over several last months, Sudan has witnessed powerful mass demonstrations which were originally sparked by the high increase in the costs of living then escalated to the demand of toppling Al-Bashir and his regime. Dozens were killed and arrested.