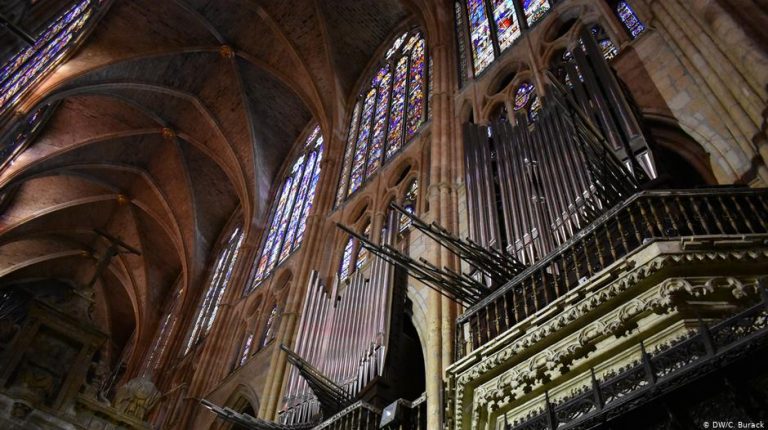 This Easter, the Leon cathedral will awe many mass-goers with its powerful organ. While DW’s Cristina Burack knows the cathedral well, discovering the organ was made by Klais Orgelbau in Bonn sparked a hunt for meaning.Some 1,600 km (994 miles) separate the city of Bonn in western Germany's Rhine valley from the Spanish city of Leon on the high Castilian plateau. But they're connected by some 4,130 hollow tubes of wood and tin. And every day during the Easter weekend those tubes will be filling Leon's Gothic cathedral with sound, bouncing off its limestone vaults as mass-goers from around the world take in the sanctuary's luminous stained-glass windows.

Though I now live in Bonn, I know Leon well: My relatives live there, and the city feels like a second home. I've visited the cathedral many times, even sung in it for a friend's wedding. But it was only recently that I found out its organ was built by Klais Orgelbau, a world-class organ maker in Bonn just blocks away from where I live!

This Bonn-built, Leon-located organ seemed to be an invisible connection, rooting two cities in one another that for me feel like two totally discreet worlds. Anything that bridges them takes on oversized significance. Still, I know that a company's product — instrument or otherwise — provided for a customer in a different country is ultimately just a business transaction. Or is it? I decided to find out.

Only the best will do

My first stop: the Leon cathedral to speak with officials about how the Klais organ came to be. It's a relatively new instrument, going on six years old. Installed and unveiled in 2013, it replaced an older one that was no longer fit for the city's annual International Organ Festival, which has been held in the cathedral for 35 years, drawing the world's top organists.

The prior organ "was not considered sufficient enough for the festival, so we needed a new one," cathedral administrator and priest Mario Gonzalez tells me in his office. The organ gets a lot of use: In addition to the festival, it's used for three masses every Sunday between June and October and for special liturgical days, such as during Holy Week, as well as for some 70 or 80 weddings per year, Gonzalez says.

For the cathedral, only the best would do. "It was important that the organ was made by a world-class organ maker that has organs in many important places," Gonzalez says. But there are lots of organ makers the world over, and while Germany is known for its organ craftmanship, why did the cathedral choose the Bonn-based Klais?

Enter Jean Guillou: Born in 1930, the recently deceased French organist and composer revolutionized the organ world by developing new construction and sound ideas. "I consider him to be one of the greatest organ visionaries of our time," Philipp Klais tells me.

I'm at the workshop of Johannes Klais Orgelbau in Bonn, named for Philipp's great-grandfather. It turns out the Leon-Bonn connection runs via France, since Guillou was crucial in conceiving the new organ. Klais explains how a Leon music foundation pushing for the new instrument got Guillou on board; Gonzalez had told me previously he believes Guillou pushed for Klais to build the instrument.

Klais, a fourth-generation organ-builder, describes what a dream it was to work with the warm-hearted Guillou on the Leon cathedral. In fact, he repeatedly refers the whole project as a "huge dream" — and one that took decades to realize. "My first time in Leon was with my father in 1987 or 88," Klais says. He describes how first his father, then he kept up yearly contact with the cathedral for over 20 years before finally receiving the commission in 2010.

A piece of home

Today, Klais still feels an "endlessly strong connection to Leon." Perhaps that's because Klais treasures how the Leon organ brings people together. "What excites me is how people stand in line for the organ festival for two, two-and-half-hours," he says. "And it's not five organ specialists, but 1,000, or 1,500 Leon residents, who, if you asked them individually, would probably say, 'I don't understand music, but I like the cathedral. I like the music that fantastic organists play here. And it's become a piece of my home.'"

Leon also became a sort of home for the Klais Orgelbau team when they were on-site for installation. They even called Marta Martinez, one of the Spanish project administrators, mama. "My colleagues called her Mama Martinez because … she took care of each individual's every need," Klais says. "If someone had a runny nose or if someone fell, no matter what happened, Mama Marta was there."

The call of Leon

Guillou debuted the new organ in September 2013, drawing a full house. "The cathedral was completely packed, with chairs all over the place," Gonzalez recalls.

Klais' nerves typically don't let him enjoy inaugural concerts, but he remembers how an overwhelming feeling of happiness filled the cavernous Leon cathedral after the last note died down. "You could feel how the music of Jean Guillou, the organist himself and the instrument were met with so much human warmth. It was incredibly lovely."

A workshop team member returns to Leon once a year to do maintenance work on the organ. And Klais himself traveled back in 2018 to attend the organ's 5-year anniversary concert. "I enjoyed it from the first to last minute," he says, whispering as one might when recalling a sacred moment. Many of his colleagues attended privately as well, and some even continue to spend their vacations in Leon. "That makes me excited. It's a beautiful thing," Klais says.

And I think it's beautiful too, this ongoing magnetic pull. The organ has become a piece of home for people in both Bonn and Leon. And for me, it means part of each of these cities that I call home can be found in the other.

Topics: cathedral Made in Germany