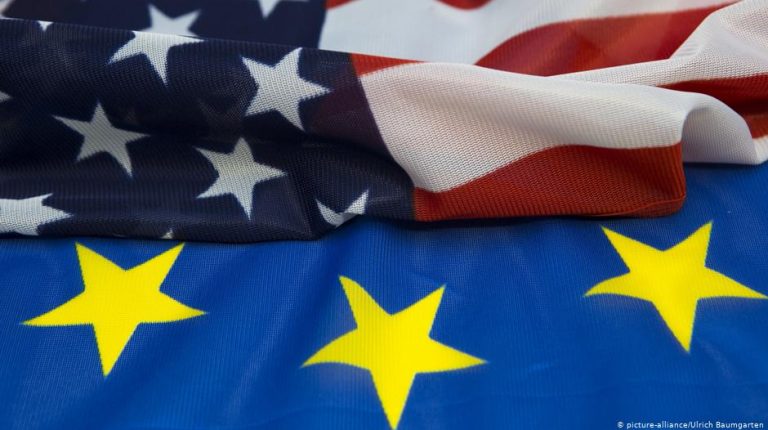 Trump’s threat of auto tariffs has finally spurred EU leaders into action on a new trade deal with Washington. As the US president seeks reelection next year, will Europe hold more clout in upcoming negotiations?Nine months after European Commission President Jean-Claude Juncker rushed to Washington to stave off the prospect of US tariffs on European cars, the European Union signaled this week it was ready to restart trade talks with the United States.

EU leaders have been grappling with the best way to respond to the Trump administration's protectionist threat. The prospect of up to 25% tariffs on foreign vehicles and auto parts still looms large — a move described as pulling the pin out of a grenade.

A US Commerce Department report, investigating whether the dominance of foreign automakers constitutes a threat to US national security, has been sitting on US President Donald Trump's desk for two months and is widely believed to have recommended imposing some tariffs.

The president still has 30 days to decide whether to proceed, so any further delay by EU policymakers in restarting US trade talks would be tough to explain to the powerful European auto industry, which faces the prospect of billions of euros in losses if Trump does act.

"The threat has served to rally Europeans to quickly enter into trade negotiations …. to buy more time and remove the threat of tariffs for the time being," said Erik Brattberg, director and fellow, of the Europe Program at the Washington-based Carnegie Endowment for International Peace think tank.

Brussels insists that agriculture is not up for discussion during the trade talks. Instead, EU ministers have approved a mandate for a limited trade deal focused on "the elimination of tariffs for industrial goods only." But while the European Commission, the EU's executive arm, insists it wants a speedy resolution — by October 31, when its five-year term ends — Washington appears to be in no hurry.

Evenett said omitting agriculture will be seen in Washington that the EU "isn't serious about this negotiation," and any deal that omits farming would struggle to be approved by the US Congress.

The EU side has already failed to get a unanimous agreement from all 28 states to restart trade talks, with France voting against the mandate and Belgium abstaining.

A previous attempt at a far-reaching trade deal, the Transatlantic Trade and Investment Partnership (TTIP), stalled after widespread opposition in Germany and France over perceived threats to EU health and food standards. A leaked copy of the TTIP negotiations showed plans were afoot to remove up to 97% of all tariffs.

"European officials are wary of repeating the botched protracted TTIP negotiations which aimed to reach one big comprehensive trade agreement," Brattberg told DW, adding that Brussels was only being as unbending over agriculture as Washington was against access to public procurement.

Although Trump's aggressive trade stance has so far played well to voters and forced Brussels into action, there's evidence the imposition of tariffs on steel and aluminum, along with similar levies on billions of dollars of Chinese products is hurting US businesses and consumers through inflation and disruption to supply chains.

A report by the Federal Reserve Bank of New York and Princeton and Columbia Universities suggests the tariffs cost Americans at least $6.9 billion (€6.1 billion) last year, and that was a conservative estimate. European policymakers are betting that imposition of auto tariffs would be even more far-reaching domestically.

"This [impact] pales in comparison with tariffs against European (and possibly Japanese) automakers which would hit hard against the American middle class with higher prices," warned Brattberg.

Evenett, however, sees "little business pressure" in the US to remove the existing tariffs, "other than in a few localized industries."

"Trump genuinely likes tariffs. If it was up to him, he'd never remove them," the international trade professor told DW.

Read more: Why higher US tariffs on car imports would backfire

US public opinion could turn

Trump's position could change when he seeks reelection next year if American voters sense that his much-hyped protectionist policies have failed not only to improve their lives, but have hurt their prospects further. Brussels seeks to influence US public opinion ahead of the vote by preparing retaliatory tariffs on goods produced in Republican and marginal US states. Brattberg sees Trump's need to keep the US economy strong going into the 2020 election campaign as "the best insurance against car tariffs."

"Trump has gradually come to grips with the fact that the EU is an impressive economic bloc, one that he cannot divide on trade issues. The specter of European countertariffs hurting American companies is, therefore, a serious concern as Trump launches into his reelection campaign and where he will need to carry industrial states in the Midwest," he told DW.

Evenett, on the other hand, thinks the upcoming campaign will be marked by more protectionist rhetoric, not less, and sees "Europe as likely a target as China."

US-EU trade talks, meanwhile, are unlikely to make much progress until the conclusion of trade negotiations between Washinton and Beijing. Some watchers have speculated that Trump's aggressive tariff regime against China may remain despite progress on trade and currency manipulation. This could further embolden the president against Europe.

"Chinese tariff retaliation didn't undermine Trump's popularity, so why should EU retaliation? Why would anyone think that expertise in designing retaliation is better in Brussels than Beijing?" Evenett told DW.