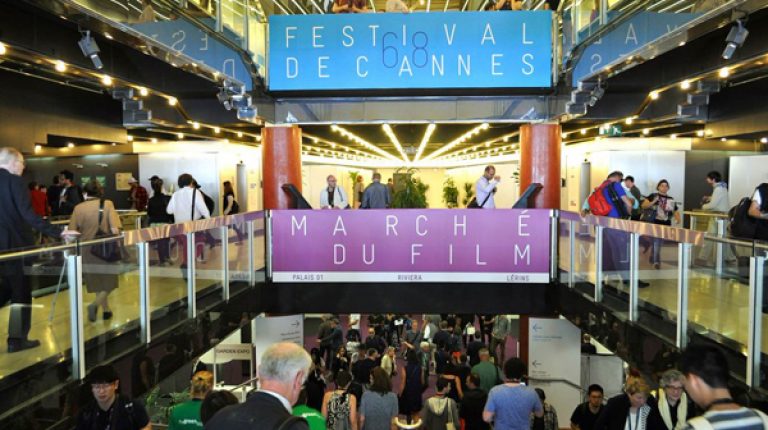 The Cannes Film Festival is preparing to welcome film professionals from all over the world to its Marché du Film. The world’s leading film market and also the oldest, celebrates its 60th anniversary in 2019.

Created at the 1959 Cannes, the Marché du Film is now the indispensable venue for negotiations about most productions distributed in theatres, on television, at festivals, or on internet platforms.

At that time, it started out in an informal, low-key manner. There were a few dozen participants and one projection room made of wood and canvas on the roof of the old Palais, on the Croisette, which held about 20 people. But it created an immediate buzz. Many producers, distributers and exporters met through the sale and acquisition of rights and productions. Cinemas on the Rue d’Antibes were hired for the occasion. By the late 1950s, the newspapers reported: “The Festival de Cannes begins this week. As much business will be done there as in six months of normal professional life in Paris.”

Bolstered by its success, the ‘Marché International du Film’ was officially integrated into the Festival de Cannes on 10 May 1961. This worried those who were keen to preserve the glamour of the red carpet: “Cannes is committing suicide. It is doomed in its current format. In another two or three years, it will be no more than a film market,” they said. However, this economical approach opened new development horizons for the festival. Very soon it was apparent there were strong connections with the industry, that their fates and their future exploits were closely linked. They continue to be so today: the Marché du Film often shows itself to be the adventurous side of the festival.

On the eve of this 60th anniversary, the Marché du Film has confirmed its leading position, having already announced figures which are strongly up on last year: 7,600 participants registered to date, compared to 6,158 at the same date in 2018, which is an increase of 23% in registrations. These are particularly encouraging figures in light of the results of the international markets so far this year.

This is even more the case because the Marché du Film has once again distinguished itself with the diversity of its participants, with more than 100 countries represented. The accredited professionals can be divided into three equally-sized groups: producers, distributors, and other film professionals. The latter includes almost 10% of festival programmers from all over the world. More than half come from the United States, France, the United Kingdom, Germany, and China. This international flavour is reflected throughout the entire festival.

In 2018, of the 40,000 accredited professionals who converged on the Croisette, over 12,400 attended 1,500 screenings of 3,000 films presented in 33 theatres in five different locations, including the cinemas on the Rue d’Antibes.

The Marché du Film is spread out inside and around the Palais des Festivals, mostly in the Riviera and in some flats on the Croisette. It carries on with the Village International on the seaside and around the harbour, welcoming numerous national pavilions.

International visibility, tools for networking and information, the latest trends in cinema and technological innovations: this premier professionals’ business event runs numerous programmes, including: Producers Network, Doc Corner, Industry Workshops, and NEXT. There are also some new ones for 2019: Cannes XR and Animation Day. This vibrancy reflects the enthusiasm which will take over the stands and walkways of the Marché du Film in a few weeks.

In this way, the most prestigious film festival in the world is consolidating its position as the essential springboard for the creation, production, and distribution of films, with one, single target in its sights: to promote the success of all types of cinema.