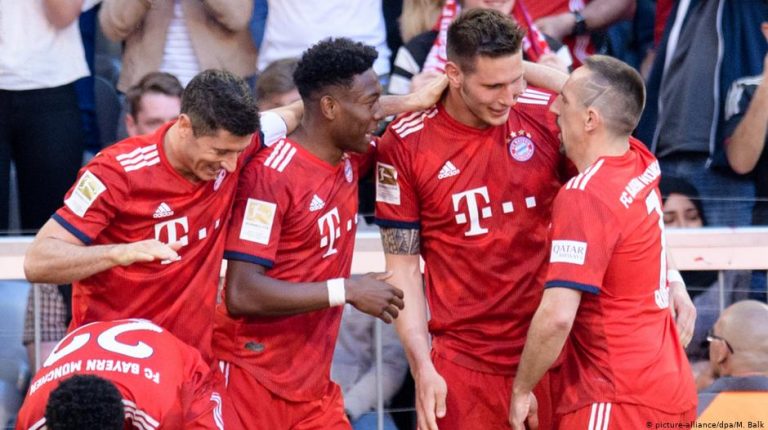 Bayern Munich’s six consecutive titles have been marked by finding any way to win. That hasn’t always been the case this term, but their 1-0 win over a stubborn Werder Bremen team bore the hallmarks of a champion side."We're playing against the strongest squad in Germany but we have an idea," said Werder Bremen coach Florian Kohfeldt just before his side strode in to the Munich sun as the latest supporting characters in the Bundesliga title story.

Bremen, who also play Bayern in the German Cup on Wednesday, came into this game against the Bundesliga leaders as one of only two sides in Europe's major leagues to have scored in each of their league games (the other being Paris Saint-Germain). Kohfeldt's plan didn't rely on Bremen's most obvious strength and it took some mental and tactical strength for Bayern to overcome it.

The Green and Whites were set up to frustrate and to maintain another streak — their unbeaten record in 2019. The visitors were compact, organized and happy to be a little physical. Theodor Gebre Selassie thundered into Kingsley Coman either side of the break, frustrating the French winger, while Milos Veljkovic took an early yellow for dumping Robert Lewandowski to the turf as the striker tried to turn in the 18th minute.

In the first half, Kohfeldt's idea looked a sound one and more dropped points looked a possibility for the champions. Niko Kovac's iteration of Bayern Munich have struggled at several points this season to put sides away, whether conceding sloppy goals or failing to capitalize on periods of dominance. And until Niklas Süle's deflected 75th minute strike, it looked like that might be the case again.

The Bavarians struggled to adapt to Bremen's shape and physicality in the opening period but were happier to use the wide areas, Serge Gnabry in particular, to trouble their opponents after the break. Though the dismissal of Veljkovic helped, there was a relentlessness to Bayern's second half pressure that felt familiar to anyone who has watched the Bundesliga in the past six seasons. It felt like the muscle memory of this experienced team of title winners was starting to return.

Jiri Pavlenka made exceptional saves from Gnabry and Lewandowski, and Thomas Müller missed from close range before Süle's speculative drive deflected in.

If the goal was fortunate, the win wasn't. For all that Kohfeldt's idea was sound, it was the first part of his comment that rang truest, Bayern do look the "strongest squad in Germany."

While the demolition of Borussia Dortmund earlier in the month was a statement of power and intent, this win by the Bavarians was the stuff titles are made of. Bayern came through a difficult opening, and found a way to beat stubborn opponents. It wasn't especially pretty and the profligacy of Gnabry, Müller and, late on, Lewandowski will be a concern for Niko Kovac.

But they got the job done once again and move four points clear ahead of Dortmund's trip to Freiburg on Sunday. They picked a good time to rediscover old habits.

That Bremen's scoring run should be dashed against the rocks at the Allianz Arena is of no huge surprise, with Saturday's shutout Bayern's fifth in a row at home. Another hurdle has been cleared as the title race enters its home straight. Bayern may not quite be at full pelt, but they know how to win from the front. Over to you, Dortmund.