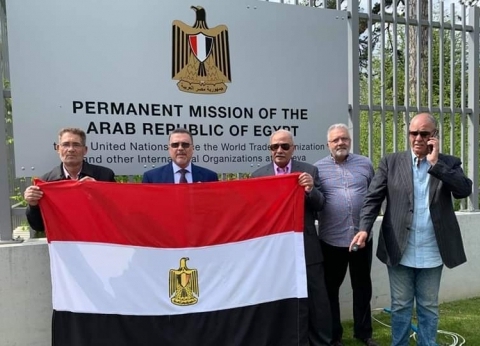 Hundreds of Egyptian expats casted their ballots in the first two days of the referendum on the constitutional amendments, in 140 voting centres in 124 countries across the world.

According to the National Elections Authority (NEA), Egyptians abroad are voting on the referendum on 19,20, and 21 April.

New Zealand was the first country to open its voting centres because of the time difference. The polling stations in the embassies and consulates of Egypt in the Arab countries, especially the Gulf countries, have seen high turnout.

Many Egyptian expats seized the chance of weekends to vote in the referendum. Saudi Arabia came in the forefront of the Arab countries in terms of the number of Egyptian expats and the turnout as well.

The vote of the Egyptians abroad on the constitutional amendments started from New Zealand on Thursday evening (Cairo time).

He pointed out that the process is going well in embassies, consulates, and diplomatic missions, however the referendum could not be conducted in Syria, Libya, Yemen, and Somalia for security reasons.

Al-Sharif added that the highest voting turnout was recorded in the UAE, Saudi Arabia. and Kuwait, pointing out that all embassies and consulates that rushed the voting were equipped with electronic reader devices.

Meanwhile, the operation chamber of the ministry of immigration and Egyptian expatriates affairs has been following up on the voting process of Egyptians abroad.

The chamber was equipped with all communication equipment to contact Egyptian communities abroad, according to the ministry’s statements.

At the beginning of the second day of voting, the chamber has received about 111 inquiries until the middle of Saturday.

Minster Nabila Makram said that her ministry is dealing with any kind of complaint from the voters round-the-clock, stressing the continuous communication with all parties involved in the referendum process to respond to all complaints and inquiries concerning the voting.