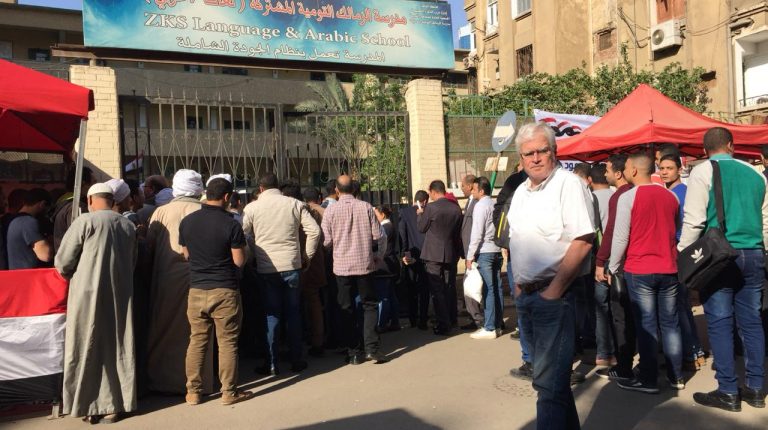 Egyptian voters started on Saturday to cast their ballots in a three-day national referendum on constitutional amendments which were approved by the parliament only a few days ago. The voting was carried amid heavy security and army presence across the country. The changes may allow President Abdel Fattah Al-Sisi to stay in power until 2030.

Residents of Zamalek and Downtown Cairo queued outside polling stations in a moderate turnout. Banners urging Egyptians to take part in the referendum were seen in the streets while others calling on them to agree and “Do the Right Thing.”

At Tahrir Square, a banner was seen of the obscure presidential candidate, and the head of El-Ghad Party, Mousa Mostafa Mousa, who competed Al-Sisi for office in the 2018 March presidential election. “Take part. Yes for constitutional amendments,” read the banner.

Meanwhile, dozens of banners were also spread all over the streets of Cairo’s upper-class district, Zamalek.

“We trust the government. We are sure it is doing the best for us, so I will do the right thing,” Gamal Abdel Nabi told Daily News Egypt, while he and dozens were standing in front of their polling station at the Zamalek National Mixed School on Saturday.

Meanwhile, Saeed Awad, a clean worker, told DNE, “I read the constitutional amendments. I know that the women’s quota in parliament will be increased, as well as the quota of farmers.”

Outside this polling station, dozens lined up to cast their votes, surrounded by banners supporting the constitutional amendments. “Do the right thing,” the banners read, while others read “Your participation is a responsibility. Take part, express your opinion.”

Ages of voters ranged from the 30s to 60s. Men were the majority with a moderate turnout by women, from lower to higher social classes.

At Abdeen Secondary School for Girls, in El-Shaikh Rihan, in downtown Cairo, just a few metres from the old building of the Interior Ministry, dozens of voters were singing outside the polling station. “I agree with the constitutional amendments, it is good for our country,” Samy Shehata, an unemployed middle-aged man, told DNE.

Other voters agreed: “These changes tackle a number of problems such as population density, human rights issues, and unemployment, and much more,” Soliman Saber, an Arabic teacher told DNE.

Elsewhere, a group of women were celebrating in front of the polling station to patriotic songs while waving Egypt’s flag. Their ages ranged from the 20s to 60s. Most of them seem to belong to the middle and underprivileged classes.

“I said yes,” Om Zainhom, a sixty-year-old housewife told DNE. “I already love Al-Sisi, so I agree with the constitutional amendments. I support the president to stay in power and complete his achievements,” Om Zainhom added, acknowledging that she is literate. “Honestly, I did not read the changes, but I heard they are good for us and for the country from TV.”

Fatma Alyamani, 45, a housewife told DNE: “I hope these changes will be good for the country. I heard that they are good for our stability and people’s welfare. So I said yes.”

Last week, parliament approved 17 constitutional amendments that include Article No 140, which stipulates the extending of the presidential term from four to six years. It also includes Transitional Article 241 which allows Al-Sisi to stay for an extra two years in office. He also will be allowed to run for another six-year term.

The amendments also proposed allocating at least a quarter of the 450 parliamentary seats for women, youth, Copts, persons with disabilities, and Egyptian expats through solid and fixed articles.