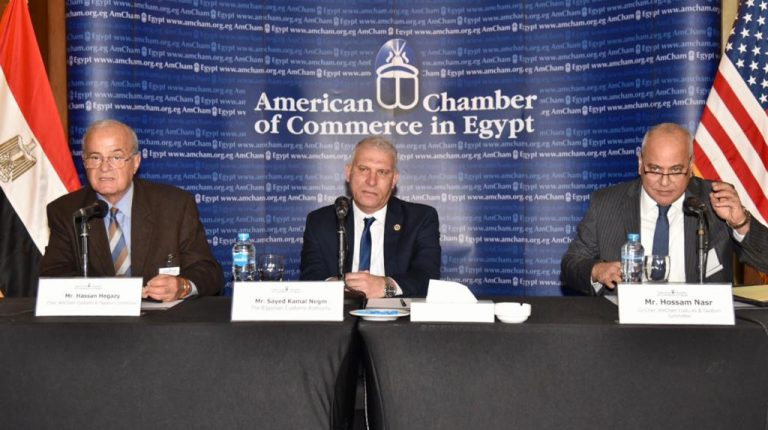 The State Council will complete within days reviewing the customs draft law, in preparation for sending it to the House of Representatives for discussion and approval, head of the Egyptian Customs Authority, Kamal Negm, said on Wednesday.

Negm said the current law No. 66 was issued in 1963 and is no longer consistent with the developments of the international trade movement. He noted that the new draft law combines customs laws and customs exemptions in order to prevent any conflict between them. It also provides for the creation of electronic signatures and the payment of customs tax and various release systems such as a subsequent review, pre-clearance, and the possibility of inquiring about fees and release procedures prior to the arrival of the goods.

This came during the meeting organised by the customs and tax committee in the American Chamber of Commerce in Cairo, headed by Hassan Hegazy and Hossam Nasr, and was attended by a large number of members and directors of companies and leaders from the Egyptian Customs Authority.

Furthermore, he stressed that there are a wide range of measures currently being taken to develop and modernise the work in customs outlets to speed up the release of imported goods, and reduce the cost of release, which will ultimately be reflected in the price of the commodity in the domestic market.

The goal is to convert customs ports into transit gates and not warehouses to store goods, Negm pointed out. In addition, he added that the number of documents required for the release of the goods is currently being reduced from 11 to only seven documents, through electronic linkage with all stakeholders such as banks, the Import and Export Control Authority, and the Tax Authority.

Over and above, he highlighted that the new draft law stipulated the risk management system, which allows for the preparation of a white list of companies committed to dealing with customs on a continuous basis.

The detection to use radiation devices will be circulated at all customs outlets soon, he stated, adding that 87 devices have been installed, with a contract to import 72 new devices for use in the rest of the ports.

The draft law toughened smuggling penalty to protect the national industry and protect the country from the entry of goods harmful to health or harmful to national security, he declared.

Plus, Negm said that the one-stop-shop is currently being implemented, and a logistics centre will be opened at Cairo International airport, and that a new centre will soon be opened in Port Said.