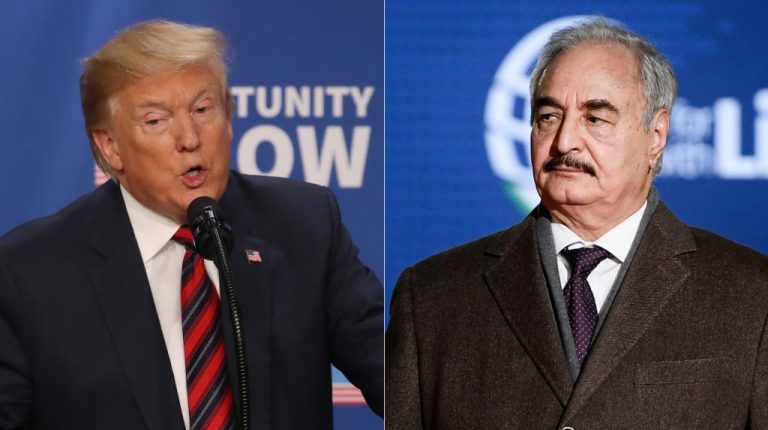 US President Donald Trump discussed the current efforts for confronting terrorism in Libya, with the leader of the Libyan National Army (LNA), according to a statement from the White House on Friday.

The statement of the White House did not tell about the delay of the conversation’s announcement. It also made no mention of Haftar’s latest military moves.

The phone call comes amid increasing tensions in Libya between Haftar’s forces and the UN-backed government in Tripoli.

Two weeks ago, Tripoli is facing the threat of being attacked by the LNA. Haftar appeared in a video calling for liberating the capital from the hands of the militias and restoring stability in the entire country.

But his objectives did not convince the international community which strongly condemned his move.

“We have made clear that we oppose the military offensive by Khalifa Haftar’s forces and urge the immediate halt to these military operations against the Libyan capital,” Secretary of State Mike Pompeo said in a statement earlier in April.

He added that “this unilateral military campaign against Tripoli is endangering civilians and undermining prospects for a better future for all Libyans.”

Spokesperson for the LNA Ahmed Al-Mismary said in media statements on Friday, that Trump praised the role of Haftar and expressed convenience of the role of LNA in countering terrorism.

On Thursday, both US and Russia rejected the UN call for a cease fire in Libya at the meantime.