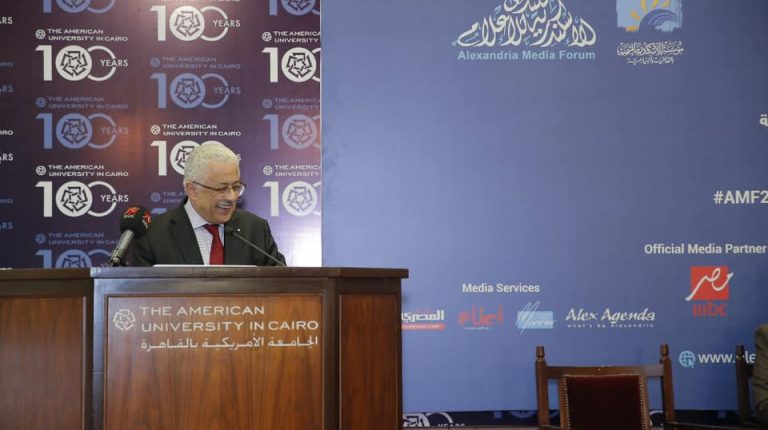 “The forum tackles this year the media information literacy and its close connection to the 17 sustainable development goals (SDGs). We believe that eliminating cyberbullying, fake news, obsession with online platforms are to the point,” Ahmed Esmat, founder and CEO of the Alexandria Media Forum (AMF), briefed during the opening of the forum’s seventh edition. 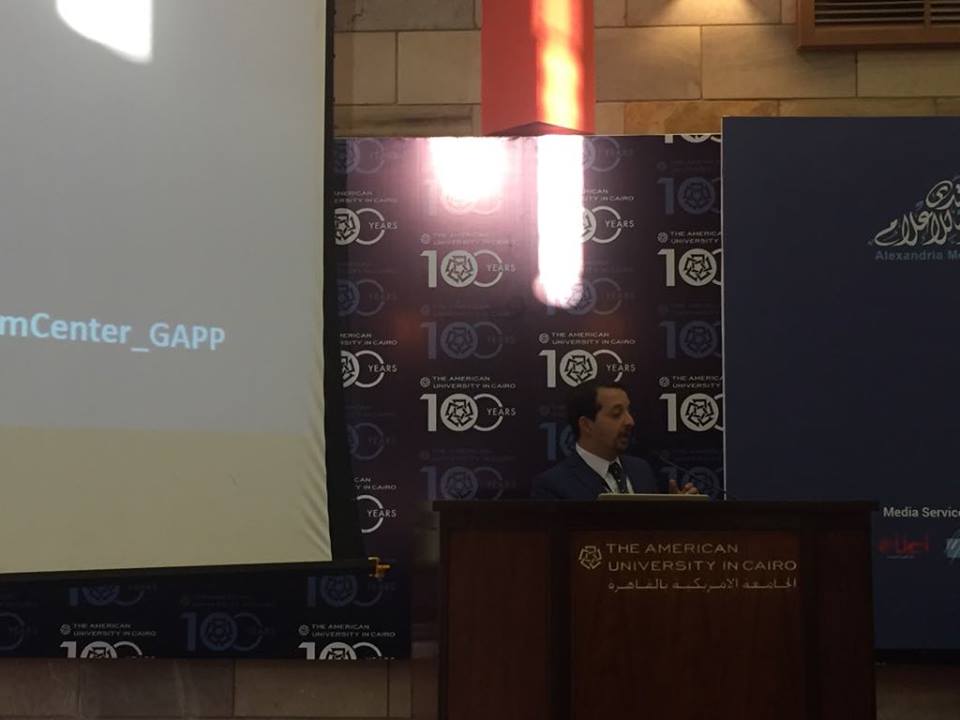 This edition was not held in Alexandria as usual, instead, it was held at the American University in Cairo (AUC) on 18, 19, 20 April, called ‘Media Information Literacy and Sustainable Development,’ in partnership with the Kamal Adham Center for Television and Digital Journalism.

More than 300 participants took part in the forum throughout the three days which hosted around 52 speakers, academics, and trainers from Egypt, Jordan, France, Yemen, and Sweden. It contained over 30 sessions and panels.

“We seek to integrate Media literacy into the curriculum of schools and universities,” Esmat told Daily News Egypt (DNE), adding, “We are preparing proposals with the Kamal Adham Center to be submitted to the education ministry to consider integrating them into the new curriculum.”

Furthermore, Esmat highlighted that the forum is always keen on providing journalists with training and workshops to enhance their skills and to shed light on the ever-changing challenges in the field of media.

“We have been planning for the subject of this edition for two years. Actually, it is an extension to the criteria of the previous forum which tackled fake news, and was called ‘Technology, Media, and Post-Truth,’” Esmat added.

“I think we are dealing with a different generation. The one who was born technology-embedded. So we have to understand their thoughts and emotions to know how to help them in recognising the disadvantages and advantages of online platforms.” The Education Minister, Tarek Shawki, opened the AMF’s seventh edition with a speech on the need to set regulations in social media platforms, as they became a source of rumours, he noted.

“Actually, our ministry occupies the second place regarding the number of rumours for the second year in a row,” Shawki revealed during the opening of the forum on Thursday. “We face an organised attack to undermine the ministry’s real efforts on the ground.”

Moreover, Shawki launched a massive attack against journalists, critical of their resort to the ministry to confirm or deny rumours.

“This is called abuse and it must stop. Journalists do not have to resort to us on every rumour, instead, they have to ask the real source of the ‘fake news’. We-because of such pressure-do not sleep at night,” Shawki complained.

At an event full of journalists, Shawki continued to lambaste the Egyptian media, claiming that the new media completely depends on social media as a source of news, which he said, is not a true way to ‘tell the truth’ as social media is full of fake news and rumours.

Journalists did not have the chance to comment on the minister’s criticism, as the window of questions has not been opened to them.

“Facebook administrators now are more important than editors-in-chief of newspapers and media websites in producing news and shifting public opinion, which I believe, reflects the situation we have reached,” Shawki said sarcastically.

Meanwhile, Shawki noted that fake news is popular among people because they prefer negative news more than positive news. “The journalist who writes positive news might be punished by readers and could be accused of being biased toward the state.”

In a nice gesture, the forum honoured Shawki for his efforts in the ministry and in improving the educational system in Egypt. Similarly, other speakers and academics were honoured too.

Furthermore, Rasha Allam, assistant professor and associate chair at the Department of Journalism and Mass Communication at the AUC, necessitated the significance of media literacy for school students.

“We will already start in the first semester (Fall 2019) to teach a course on media literacy. We, in the Kamal Adham Center, will also cooperate with the education ministry to draft a curriculum on media literacy for the first stages for school students,” Allam told DNE.

Furthermore, Allam clarified that the curriculum will teach children how to log in on a website, learn its history, check whether it is a credible source for information or not, how to deal with social media, and how to fact-check news, and to be aware of how to use social media platforms.

“The media field faces many challenges including fake news, the violation of people’s privacy, and cyberbullying,” Allam maintained.

Similarly, TV host Amr El-Leithy, one of the forum speakers, asserted that one of the most critical issues in media today is the abandonment of media ethics and standards.

On Friday, the second day of the forum, a series of sessions have been held on ‘Media literacy and Content.’ The discussions tackled the challenges confronting Arab digital content.

Khaled El-Baramawy, Egyptian journalist and digital media specialist, said that the main source of revenues of media institution are advertisements and paid content. However, both sources face several difficulties in Egypt and in the Arab world, he noted. 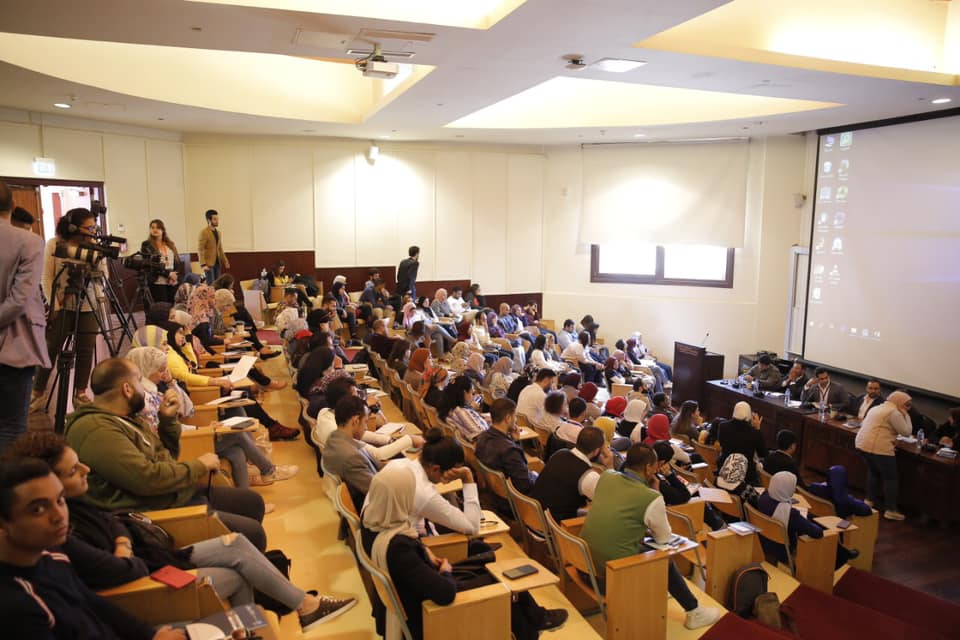 “We have to produce a content that forces readers to subscribe, such as the entertaining and humanitarian content which is based on true stories,” El-Baramawy told DNE.

Moreover, El-Baramawy asserted the need for producing content that has a value and also to be unique. “Readers will never pay for something that has no value, benefit, or not enjoyable for them.”

Furthermore, El-Baramawy stated that understanding the nature of media and social media platforms and suitable content for each platform, has become a necessity to overcome ever-changing obstacles facing digital content in the Arab world.

“Journalism has a crisis related regarding probability. Therefore, it is important to think before publishing or producing content on a suitable platform,” El-Baramawy.

El-Baramawy pointed out that each media institution has to pay more effort in producing different kinds of content and recognise the best media and social media platform for them. He elaborated and stated that there is a need, “To carefully study your audience and platforms, as well as the nature of your content,” El-Baramawy concluded.