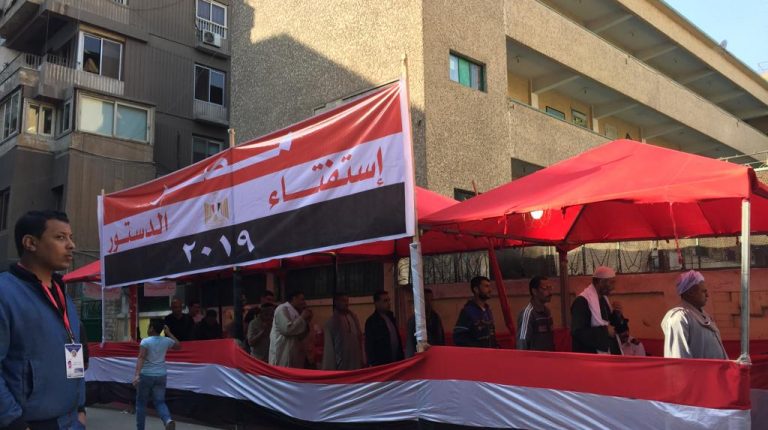 As Egyptian voters headed to cast their ballots across the country in a national referendum on the constitutional amendments which might allow current President Abdel Fattah Al-Sisi to stay in office until 2030, another online feud erupted among supporters and opponents as well as critics who called for boycotting the referendum voting.

On Twitter and Facebook, users called Egyptians to vote in favour of the constitutional amendments, denouncing the boycotting calls or opposing them. “When singer Om Khalthoum stood for the military, people cursed her. Similarly, it happened again with actress Lebleba, however, she is a patriot and a respectful women” tweeted Tamer, referring to the actress’s participation in the voting.

Supporters circulated hashtags such as “Yes for constitutional amendments,” and ‘Go to polls, take part.”

“I visited many polling stations. they were very crowded with seniors. This really reveals the sense of responsibly toward our country,” tweeted Iman. Another tweeter wrote: “President, go ahead. We are all with you.”

On the other hand, many hashtags were heavily circulated among tweeters including, “No for constitutional amendments,” “head to polls and say no,” and “No for extension (presidential period).”

Those who oppose the constitutional amendments urged citizens to head to the polling stations across the governates to say no. They shared their ballot papers where they refused the changes. “This is my first time to vote. I am glad I said no. I am sure that justice and stability will occur if I say no,” tweeted Mohamed.

Meanwhile, Tarek wrote: “I voted and said no. Say no for constitutional amendments.”

Critics opposed the constitutional amendments because they believe they will undermine the foundations of the modern constitutional state and harm freedoms as they represent a violation to the country’s 2014 Constitution.

On Saturday, Egyptians began casting their ballots in a three-day national referendum on the constitutional amendments which were approved by parliament only a few days ago. The voting has been carried out amid heavy security and army presence throughout the country.

More than 61 million citizens are eligible to vote on the referendum at over 368 public committees including 10,878 polling stations across the country.

The changes include amending Article No 140 of the constitution to extend the presidential term from four to six years. A Transitional Article 241 allows Al-Sisi to stay for an extra two years in office. Al-Sisi will also be allowed to run for another six-year term.

The amendments also include Article 200 on the role of the country’s military. It stipulates that the Egyptian armed forces will take be charged with ‘protecting the country and its security and preserving the constitution and democracy.’

Furthermore, the changes also provide amending Article No 204, as civilians could face military trails in the case including committing assaults on military installations, camps or border.

The amendments also allow the president to appoint top judges of the country and the general prosecutor. Meanwhile, it provides a quota over women’s representation in the parliament with at least 25%.