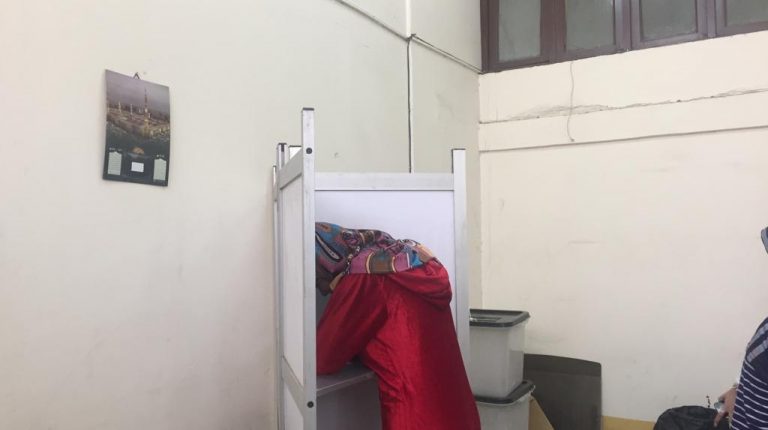 Egyptian voters headed to the polling stations across the country to cast their votes on Monday, the last day in a three-day national referendum on constitutional amendments which were passed by parliament only a few days ago. The constitutional changes may allow President Abdel Fattah Al-Sisi to stay in office until 2030.

Across the country, security and army presence were extensive since Saturday. More than 61 million citizens are eligible to vote on the referendum at over 368 public committees including 10,878 polling stations throughout the country.

Residents of Nasr City and the Boulaq district (downtown), Cairo, queued in a moderate turnout outside polling stations as some of them tended to celebrate holding posters of Al-Sisi and waving Egypt’s flag. Elsewhere, the turnout was below-average at a polling station in Agouza, Giza.

Outside the Workers University, Nasr City, huge banners and billboards signed by the head of the Egyptian Federation of Independent Trade Unions, Jabali Al Maraghi, read:” Yes for constitutional amendments. For a decent life.”

Voters were from different ages of both women and men, with ages ranging from 20s to 60s. They seem to belong to the middle class and many underprivileged citizens.

An underprivileged young lady stood shyly to receive her ballot paper, and then she voted and moved out. Another woman, 40, got out with a smile after she cast her vote in favour of the constitutional amendments. “I did this for my children’s future. I did this to increase job opportunities for Egyptian youth,” Hala Kamal, a silver jewellery store owner, told Daily News Egypt.

“The ongoing state projects, especially inside the New Administrative Capital, will provide new chances for youth and better future. I said yes to prevent my children from travelling aboard to find work,” Kamal added.

Meanwhile, Hussien Shoman, a state employee in his 60s agreed that the constitutional changes will maintain security and stability. “I would like to thank the media because it allowed me to be entirely convinced with the changes. This is our country and we should protect it.”

However, at one of the compound’s polling station, a thirty-year-old woman said that she voted against the changes. “I said no because I believe in the peaceful rotation of power. I believe we should have a constitution with some articles as a red line and not to be changed in this way,” Noha, who asked to be introduced only with her first name, told DNE.

A forty-year-old father with his young children, all in red T-shirts, also came to cast his vote. “They chose to say yes, not me,” Mostafa Fathy, a pharmacist, told DNE, pointing out to his daughter and son.

“I read most of the changes. I think they stabilised the successful path we started. Honestly, I am not in need of any kind of change or unrest for the upcoming 10 or 15 years,” Mostafa highlighted.

Elsewhere, a pick-up truck with loudspeakers of patriotic songs stood outside a polling station in the Boulaq district, Downtown Cairo, at the Industrial Technical Institute. Dozens of men and few women of middle and underprivileged classes lined up in a moderate turnout to cast their votes.

At a waiting line of middle age and above of male voters, Anwar Abdel Rahman, a state employee in his 60s, said that he will vote in favour of the constitutional amendments. “It is for the people and the public interest,” Abdel Rahman told DNE, without explaining more about the nature of the amendments he chose to agree with.

Elsewhere, At Agouza Secondary School for Girls, the celebration vanished on the third day of voting, with a below-average turn out. However, banners and billboard urged citizens to take part, sometimes to say yes, were spread everywhere.

“I said no because the 2014 Constitution meets many of the demands of the 25th January Revolution and 30 June’s uprising. I believe that approving such amendments would harm the concept of rotation of power and freedoms,” Ahmed Adel, a thirty-year-old pharmacist, told DNE.

Last week, parliament unanimously approved a number of constitutional amendments with 531 MPs in favour and 22 against. The changes include amending Article No 140 of the constitution to extend the presidential term from four to six years. A Transitional Article 241 allows Al-Sisi to stay for an extra two years in office. Al-Sisi will also be allowed to run for another six-year term.

The amendments also include Article 200 on the role of the country’s military. It stipulates that the Egyptian armed forces will take be charged with ‘protecting the country and its security and preserving the constitution and democracy.’

Furthermore, the changes also provide amending Article No 204, as civilians could face military trails in cases including committing assaults against military installations, camps, or borders.

No billboards in Cairo’s streets due to COVID-19: AdMazad Study