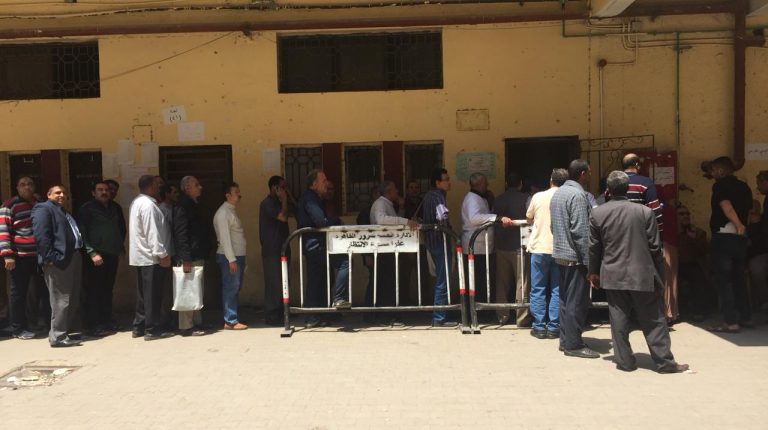 The district of Kerdasa, one of Giza governorate’s biggest and most populated, witnessed medium voter turnout on the third day of the referendum on amendments of the 2014 Constitution.

Outside the Fatma Al-Zahraa School in Kerdasa, dozens stood outside the polling station as few voters line up to cast their votes. Some of the crowd have already voted in other polling stations and were asked by campaigners to gather outside other schools.

A typical scene has been staged outside the polling station, elders dancing to nationalist songs, independent trimmed young campaigners organising the lines, and microbuses and tuk-tuks escorting people to the polling station, a scene that can be argued to be common in several areas of the country for the last three days.

One of the voters waiting in the line, Abdel Halim Aref, a 56-years-old farmer, told Daily News Egypt that he heard on TV that the amendments “will serve the interest of the state.”

“I will go and vote hoping for a better future for my children and grandchildren,” the elderly farmer who took refuge in a shady area around the polling station said as he awaits the bus to escort him back where he lives.

Aref has four sons, two of them are performing their mandatory military service. “I wish that when they finish, the country is stable, and they can find decent jobs from which they can start a family.”

Despite being a few kilometers away from Giza, the second main city of the country, Kerdasa is considered one of the impoverished outskirts, where unemployment is high and the infrastructure is deteriorating.

The walking distance from the Fatma Al-Zahraa School to the district’s Kerdasa Secondary School where another polling station is, dozens of posters calling on citizens to vote “yes” on the amendments have spread, all signed by different shop owners in the area, parliamentarians, big families, and businesses owners. Also, all the posters have the logo of the “Do the Right Thing” campaign, an initiative whose slogan can be seen, heard, watched all over the country via different mediums, TV, posters, radio ads, video clips, and songs. Nevertheless, little has been discussed about the sponsor of the campaign or which entity is behind it.

Around the Kerdasa Secondary School, a tuk-tuk has escorted two elderly women who live in the other side of the district. One of them called Fawzia, a 45 years old house wife, said “I am here to declare my love for President Al-Sisi and the government, and I want to urge them not to raise the prices again because people are tired,” Fawzia said after she was handed an Egyptian flag as she enters the polling station.

A senior official in “Do the Right Thing” campaign in Kerdasa told Daily News Egypt that volunteers “have donated their time to come and help the people to learn about the amendments and to find their voter registration numbers. Similarly, the microbus and tuk-tuk drivers all have volunteered to give free rides.”

In Kerdasa, according to a judicial source who preferred to remain anonymous, there are 17 polling stations, and 40 other sub-polling station that are divided all over the district. The judge added that around 220,000 voters are eligible to vote in the district.

Kerdasa has been long known for being a stronghold of Islamists, especially the now-banned Muslim Brotherhood group. Since the 1950s, several clashes have taken place between Islamists and police forces. These clashes, however, escalated following the violent dispersal of Rabaa sit-in in August 2013, which took place after the ouster of Islamist former president Mohamed Morsi. The clashes were followed by several police and army campaigns that left dozens killed from the ranks of security forces as well as civilians. In addition, dozens of men from the village are on trial in different violence-related criminal cases.

Mostafa Awad, a 35-years-old worker in one of the district’s bazaars which were negatively affected by previous violence escalation, told Daily News Egypt that he voted in order to “bring stability to the district.”

“We have seen much violence in the last years. We want tourism to be back and for life to get back to normal,” he added.

Kerdasa is known for several bazaars and clothes traders.

Despite the festive atmosphere around the polling stations, voters hope the suggested amendments can improve their living conditions and “cause some stability in their economic conditions.”

One voter, a teacher in a primary school, named Hamed, told Daily News Egypt that he does not mind supporting the current political administration as long as they provide welfare to civilians and make sure that “the people can afford to eat.”