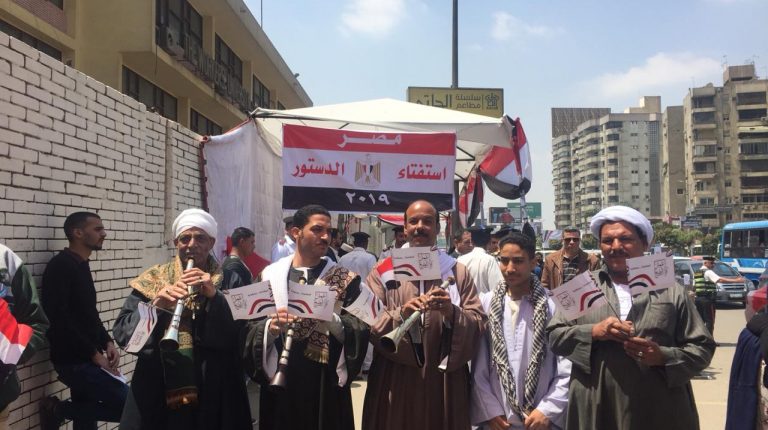 Scenes of females dancing in front of polling stations became common during elections in Egypt. Since the first day of the vote on the constitutional referendum of 2019, photos and videos for people dancing on national songs have spread on social media platforms and on news websites.

These scenes are not new to the public as similar scenarios were witnessed during the presidential elections of 2018, even more for females of different ages dancing and celebrating in front of polling stations, This raises the question of what are the reasons behind such a phenomenon as some experts urged that it is new to Egyptian behaviour toward elections.

Professor of political sociology Ibrahim Bayoumi told Daily News Egypt that “celebrations in elections is not really normal in elections and they are created by certain groups which we call populist systems who gather people for voting.”

“However, the referendum is a form of democracy and instead of celebrating, awareness on approved amendments would be better for people,” the professor said, adding that there should be increased awareness on each amended article and before the referendum.

He also refuted voting by yes or no over all the amendments, suggesting that voting should be on each article for fair results and for completing the democratic process.

Despite that, parliament speaker Ali Abdel Aal urged the National Elections Commission (NEC) to attach fryers to explain the amendments, so that every citizen can be fully cognisant of each article, but there were no similar cards in committees whether abroad or inside the country.

He also denounced critics on dancing and celebrations in front of polling stations, saying that there are attempts to spoil their joy.

“If people want to criticise, they out to comment on those who are trying to distort the image of the referendum by distributing food boxes to people.”

They published photos of citizens handing boxes in front of a supply retail chain which is surrounded by posters of parliament members and media figures supporting the amendments.

Political science professors Hassan Nafaa told Daily News Egypt that celebrations in front polling stations is something new to the history of elections in Egypt which appeared recently to portray that people are satisfied with the amendments.

Egypt’s government State Information Service (SIS) said the media coverage in the first two days of voting in the referendum on the constitutional amendments largely referred to the safety enjoyed by voters, dismissing claims of providing voters with food and transport in exchange for voting.

“These claims are ‘contradictory’ because polling stations are available in every village, and the state would not resort to such individual practices to influence voters,” the SIS said in its statement analysing foreign media coverage of the referendum on the constitutional amendment issued on Sunday night, where it highlighted the international attention given to the polls.

Moreover, vice president of the NEC, Mahmoud Al-Sherif said that there is a committee to monitor any electoral irregularities, including guidance or bribery, during a press conference on Sunday.

“In case of any violation, we will deal with it immediately according to the law, which gives us the right to refer violators to the general prosecutor to face the appropriate penalties for them,” he stated.

Tarek Saeda, acting head of the Media Syndicate said in press statements that the operations room of the syndicate witnessed blatant excesses by channels loyal to the Muslim Brotherhood through the use of photoshoped photos showing illegal acts taking place during the voting on the referendum.

The referendum on the amendment of 22 constitutional articles started on Saturday which witnessed a high turnout as stated by the NEC and is witnessing its last day on Monday.

Sunday also marks the third and final day of voting for Egyptians abroad, who started casting their ballots in Egyptian embassies and consulates on Friday and results of both are expected on 27 April.