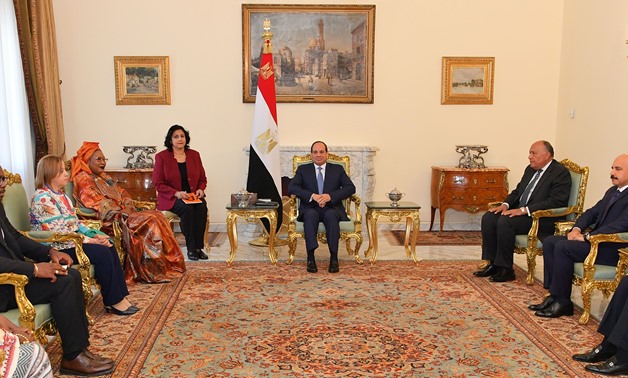 Egypt will host for the first time a non-governmental forum launched by the African Commission on Human and Peoples’ Rights (ACHPR) which will be held in Sharm El-Sheikh from 24 April to 14 May.

Discussions during the forum will include the issues of migration, asylum, displacement, women, children and groups in need of care, as well as the implementation of the standards contained in the African Charter on Human and Peoples’ Rights.

Egypt’s President Abdel-Fattah Al-Sisi received the ACHPR delegation in Cairo on Monday, where he urged them to “closely observe” the situation in Egypt and asserted that the advancement of human rights is a top national priority for the country’s 2030 Vision.

The president gave his remarks during a meeting with the Chairperson of the African Commission on Human and Peoples’ Rights (ACHPR), Soyata Maiga.

Notably, the forum was inaugurated by ambassador Youssef Zadeh, representative of the Egyptian foreign minister; Maitra Sweata Maiga, chairperson of the African Commission on Human and Peoples’ Rights; Mabasa Fall and Professor Hanna Forster from the African Centre for Democracy and Human Rights Studies, as well as Alaa Shalaby, the president of the Arab Organization for Human Rights.

The opening speeches emphasised the importance of the role of civil society in enriching and strengthening the African human rights system, and a number of key issues related to public mobility and democratisation, including in Algeria and Sudan, and the suffering of people in turbulent areas, including Libya.