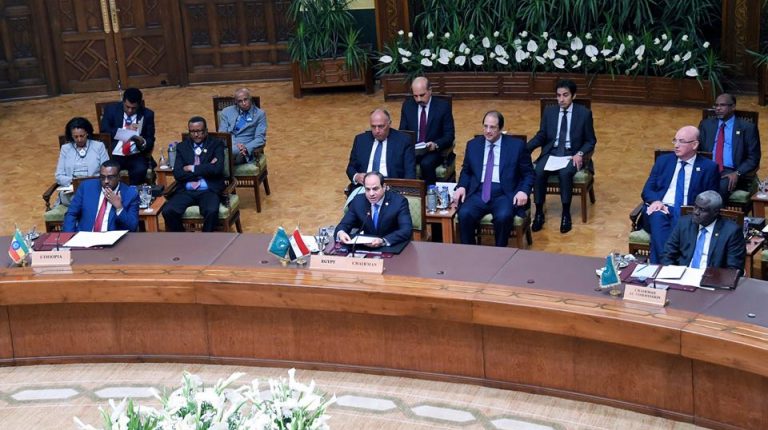 Several African countries called on the African Union’s (AU) Peace and Security Council (PSC) to extend the period granted for the ruling military council to hand the power in Sudan to a civil government to three months, the Egyptian Presidency announced on Tuesday.

The AU has previously set a two-week period for the military council to form a civil government in Sudan.

The statement followed a summit held earlier on Tuesday on Sudan and Libya in Cairo with the participation of regional partners.

In a statement, the presidency said the AU foreign ministries will hold a follow-up meeting to look into the updates in Sudan and then to deliver a detailed report to the presidents of the participating states.

At the opening session of the summit, President Abdel Fattah Al-Sisi asserted that Egypt supports the choices of the Sudanese people and their free will to build their future and determine the political path.

Al-Sisi, as well as other participating countries, called on the international community to support the Sudanese people and provide them with needed aid to ease the economic crisis in the country.

The president also asserted that the political solution in Sudan will be only drafted by the Sudanese themselves.

Meanwhile, Al-Sisi noted that the political solution should include a comprehensive dialogue between the various Sudanese parties in a manner that will achieve the hopes and ambitions of the Sudanese people and which will lead to fair elections.

Earlier, Al-Sisi met his Somalian and South African counterparts and asserted Egypt’s keenness to support the security and stability in Somalia, and enhance bilateral cooperation. Furthermore, Al-Sisi pledged to provide all manner of support to help the people of Somalia in their efforts which aim to build their state’s institutions and enhance security and stability.

The letter, the Egyptian presidency said, “included recent updates in Sudan and looked forward to Egypt’s continued role to support stability in Sudan in order to overcome this phase.”

Al-Sisi asserted his country’s “full and unconditional readiness to provide all means of support to Sudan in order to realise the milestones in the interest of the Sudanese people.”

Last week, an Egyptian high profile delegation visited Sudan over the recent updates in the country. Earlier, Al-Sisi voiced his full support of the stability and security of Sudan as well as the Sudanese Military Transitional Council and its efforts in resorting stability and de-escalating the situation there.

Over several previous months, Sudan witnessed powerful mass demonstrations which were originally sparked by the high increase in the costs of living, then escalated to demanding the ousting of Omar Al-Bashir and his regime.

Al-Bashir was already toppled by his military nearly two weeks ago. He was transferred to the Kober prison, one of the country’s most notorious detention sites.