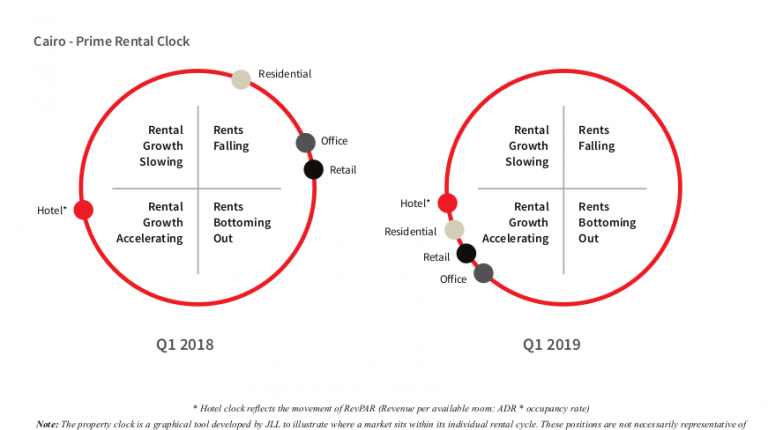 According to the Jones Lang LaSalle (JLL) report, performance remained strong across all sectors of the Cairo real estate market in the first quarter (Q1) of 2019.

JLL added that the residential sector registered mixed performance, with sale prices slowing over the quarter, while rental rates increased on the back of limited supply of rental property in Greater Cairo.

Concerning the supply of the residential sector, the Q1 of 2019 saw the delivery of approximately

east (all of which are villas), and the Courtyards (apartment units) in the west. Almost all units in

the Courtyard project have been sold off-plan to higher-income households. An additional 12,500 and 46,700 units are expected to be handed over in the remainder of 2019 and 2020 respectively.

Concerning the supply of the office sector, JLL explained that only 2,800 sqm of gross leasable area (GLA) were delivered to the market in Q1, bringing the current total office stock to 1m sqm of GLA.

Retail rents remained stable during Q1 but increased over the past year, with further growth expected in the rest of 2019.

In terms of the supply of the retail sector, JLL stated that it remained unchanged at 2.1m sqm of GLA, as no new retail centres were delivered to the market in Q1. An additional 381,000 sqm of retail space is expected to enter the market by the end of the year, including Madinaty Mega Mall which is partially open, Almaza City Centre, and the Yard Mall. Most of the future supply is in New Cairo, with limited announcements in West Cairo. New developments are largely focused in areas which lack existing purpose-built good quality retail, which will contribute to their success.

“The hotel and tourism sector witnessed sturdy growth levels, with occupancy rates increasing to 77% in the year-to-February 2019,” according to JLL.

It added that enhanced security measures, reforms in the tourism sector, improved public relations and publicity campaigns all contributed to this growth.

JLL explained further that the hotel supply in Cairo currently stands at 23,300 rooms. The last addition was the St Regis in downtown Cairo (adding 366 rooms to the market in late 2018), with no further additions recorded in Q1 of 2019.

An additional 600 rooms are expected (excluding one development on hold) to enter the market over the remainder of 2019, including the Hilton Maadi Tower and the Element Hotel (an eco-conscious development hotel), provided there are no further delays.