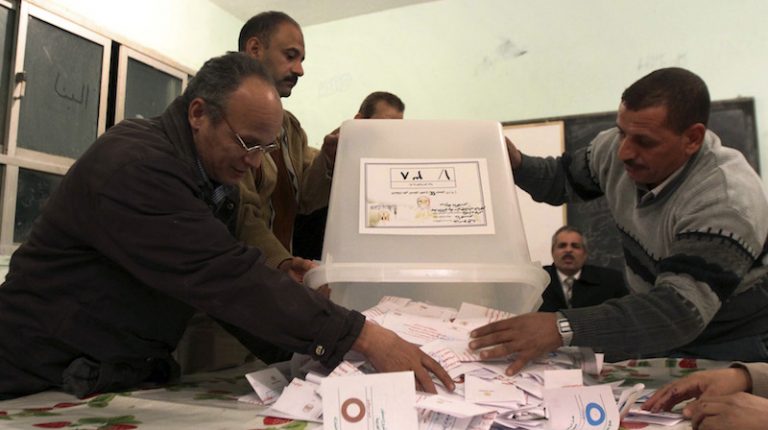 Vast majority of Egyptian eligible voters inside the country and abroad supported the proposed amendments over the 22 articles in the constitution, the National Election Authority (NEA) has announced.

Head of the NEA, Lashin Ibrahim announced in a press conference that more than 23 million, or 88,83% of Egyptians have voted in favour of the amendments, while around 3 million, or 11.17 % opposed the changes. The number of void votes reached 831,172 votes, or 3.6%.

Lashin clarified that 27.1 million of 61 million eligible voters turned out to vote, with a turnout rate of 44,33%.

The NEA announced earlier on Tuesday that it would declare the results of the three-day national referendum on constitutional amendments today.

The sudden announcement came a day after the NEA said that it would announce the results before 27 April.

Furthermore, the NEA asserted that the authority is the only body which has the right to announce the results. However, it said that the media had the right to be present in the polling stations during the counting process.

The number of judges who supervised the referendum is 15,234 in all polling stations, while there were 4,015 judges on call in case of an emergency, according to NEA spokesperson, Mahmoud Al-Sharif.

Meanwhile, the NEA denied receiving any complaints regarding the voting process. Yet, it stressed that the referendum went well in full swing and regularly and that citizens lined up before polling stations before the voting process began.

The referendum began last Saturday and concluded on Monday at over 368 public committees including 10,878 polling stations throughout the country. More than 61 million citizens were eligible to vote on the referendum.