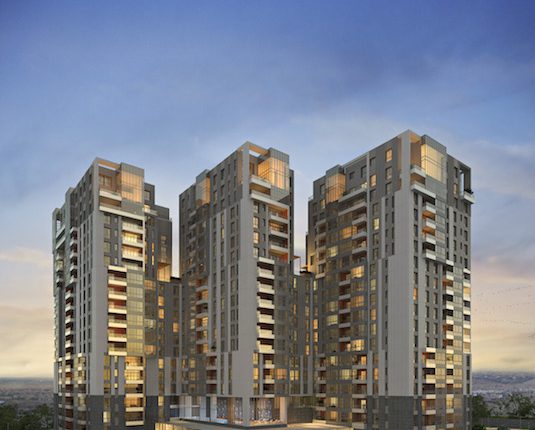 Basil Ramzy, the CEO of Marakez, said, “AEON Towers, our 72-metre luxury towers located within AEON in the heart of Sixth of October city are the first of their kind to be developed in any of Cairo’s new urban communities. The complexity of the technical systems and the demands of the luxury amenities of the project required a particularly capable and experienced contractor to help bring the towers to reality; we are pleased to have reached terms with Hassan Allam Construction to be that partner”.

Hassan Allam, CEO of Hassan Allam Holding, said: “As a recognised industry leader, it is our pleasure to be awarded the construction of AEON Towers, a project that includes innovative concepts and iconic homes that set a new standard for contemporary living in Egypt.”

Located southeast of Mall of Arabia, the mall will have it all, with a direct pedestrian link. AEON will include a total of 401 units, offering a wide variety of designs, with studios and apartments ranging from one to four bedrooms, as well as penthouse duplexes with unmatched views of the city, ranging in size from 85 to 665 sqm. Delivery of the first tower is expected in 2022.

The foundation works were carried out in the company’s residential AEON Towers project and it comprises of three residential towers with 400 apartments of various sizes, in addition to Aeon Courtyard buildings, which is scheduled to be delivered in the current year, six months ahead of schedule, Ahmed Badrawi, the CEO of Marakez, previously told Daily News Egypt.