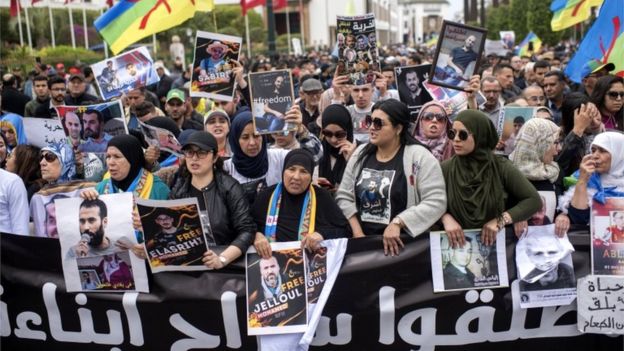 Thousands of people protested in Morocco’s capital Rabat demanding the release of 42 activists who were arrested during a previous protest against corruption and unemployment.

Protesters have been pictured with flags, banners, and pictures of the jailed activists, who are members of the Hirak Rif – or the ‘Rif Movement.’

A court upheld a sentence of a maximum prison term of 20 years to Hirak leader Nasser Zefzafi who is charged with threatening the state security.

The same term was given to activists Ouassim El Boustati and Samir Ghid, while others were given sentences of up to 15 years.

The demonstrations also called for the release of journalist Hamid El Mahdaoui, who is serving a three-year sentence for covering the protests in Morocco’s northern Rif region.

The activists demanded social and economic reform for months between the fall of 2016 and the summer of 2017, while authorities accused them of serving a separatist agenda and plotting to harm state security.  In August 2018, 11 activists were released under a royal amnesty.