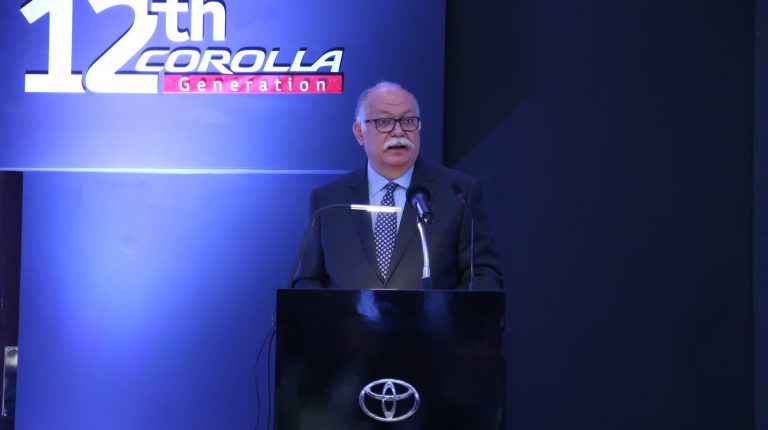 Toyota revealed the 2020 Corolla model during a big celebration, throughout which the details of the new generation was announced.

Ahmed Monsef, CEO of Toyota Egypt, said his company aimed to get next year’s Diamond award through the new generation of the new Corolla sales, pointing out that the model has broken sales around the world reaching 46m units since 1966. He added that the company doubled its efforts to introduce the new Corolla generation at the same price as the old generation, noting that the previous generation saw sales of 33,000 cars in Egypt.

He told Daily News Egypt that Toyota is on the threshold of offering hybrid cars in Egypt soon. Head of Sales at Toyota Egypt, Ahmed Gogo, said the new generation had the TNGA feature, which is Toyota’s latest invention in car design, and adds a unique impression of the car, in addition to the strength of the car interior, which enhances the dynamics of the car.

The new Toyota Corolla comes with a new, attractive design for the front-end bumper, with LED lamps to give drivers a better view of the road, along with LED rear lamps with a chrome finish to give them a sleek design.

The interior of the Toyota Corolla is characterised by luxury, quality, and attention to detail, which greatly enhances the enjoyment of the driver and passengers.

Car storage spaces have been developed to be more user-friendly, and the vehicle has been fitted with rear air-conditioning vents for the highest passenger comfort in the rear cabin.

The multi-functional steering wheel allows easy control of several functions such as answering the phone and controlling the entertainment system whilst driving, in addition to controlling cruise control.

The advanced sports design of the driver’s seat can be adjusted in six directions and the new additional Lumbar Support for long journeys.

The new Corolla is designed to guarantee unlimited comfort to its driver by providing the latest technology. Furthermore, the new Corolla includes a smart key, rain sensors, an automatic lighting system with a ‘Follow Me Home Technology,’ rear sensors, front and rear parking sensors, and daytime safety lights.

The highest security standards in its class

Toyota Corolla has the latest safety features in its class. The car is equipped with ABS, BA, and EBD brake systems, along with HILL ASSIST control, in addition to the advanced electronic stability system, which in turn maintains the stability of the car around the corners.

This is in addition to the airbag distribution system throughout the vehicle to protect both the driver and the passengers in the rear seat with six air bags: Driver + Passenger + Side + Curtain Side, supported by a high-strength steel structure that combines all these factors to provide maximum safety for the driver and passengers.

Highest level of performance on the road

Toyota Corolla offers a strong performance thanks to the advanced capacity of 1600cc engine that is running VVT-i-system with a sporty driving system which helps to reach the highest levels of speed and performance in record time (Sports Mode). The engine allows the car with the automatic transmission developed system (CVT) to gain better control of speeds for more exciting driving while offering the highest levels of comfort and smooth driving response despite using electronic fuel injected fuel consumption system.

The Corolla’s 12th generation combines many luxurious features such as a dual-touch automatic air conditioner; Bluetooth; a 6-speaker audio system; a 7in touch screen; and an AUX input; USB; a rear view camera; cruise control; tinted glass; a multifunctional steering wheel; a remote key; a sun roof, a wireless phone charger, and electric powered mirrors to give the driver all his or her infinite luxury requirements.