A Graeco-Roman rock-cut tomb belonging to a man called Tjt was discovered on Tuesday through an Egyptian-Italian archaeological mission working at the Aga Khan Mausoleum area in Aswan, according to a press release published by the ministry of antiquities. 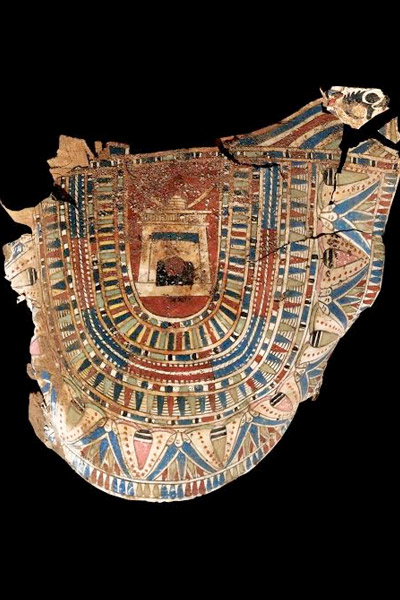 Mostafa Waziri, general-secretary of the Supreme Council of Antiquities, stated at the press release that “inside the tomb the mission found parts of a painted wooden coffin, and fragments of another featuring the name of the owner and invocation to the gods of the First Cataract Khnum, Satet and Anuket, as well as Hapy, the Nile-god.”

Several mummies were unearthed from the tomb. Each was found separated from the others.

Patrizia Piacentini, head of the mission, explained that four of the found mummies were discovered accompanied with vessels that still contain food. She added that large number of vessels and amphoras were unearthed as well.

Ayman Ashmawy, head of the Ancient Egyptian Antiquities sector at the ministry of antiquities, said in the press release that “the tomb consists of a stair partly flanked by sculpted blocks leading to the funerary chambers. The entrance was closed by a stone wall found in the original place that had been erected over the stair.”

Two of the mummies are believed to belong to a mother and her child. They were “covered by painted cartonnage.”

One of the found coffins held the largest number of mummies at this discovery.

“A round-topped coffin was excavated directly in the rock floor. In the main room lied around 30 mummies, among which some of young children who were deposited in a long lateral niche,” Piacentini explained.

She further added that the mission found “an amazing intact stretcher made with palm wood and linen strips, used by the people who deposited the mummies in the tomb, leaning against the north wall of the room.” 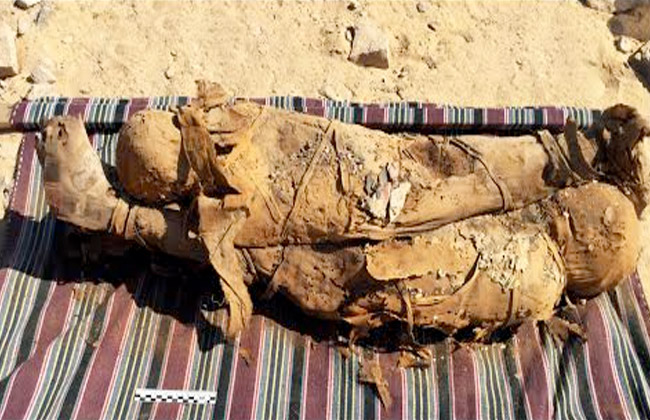 The press release added that the mission found various vessels containing bitumen for mummification and white cartonnage ready to be painted.

“On the right and left sides of the door, many beautiful coloured and gilded cartonnages, fragments of funerary masks painted with gold and a well-preserved statuette of the Ba-bird, representing the soul of the deceased, still presenting all the details of the decoration have been found,” Piacentini added.

The mission is expecting that there are around 300 tombs at the Aga Khan Mausoleum area. They drew an approximate map of their spots, as they suspect that the tombs go from the fourth to sixth century.

“The Egyptian archaeologists had already excavated 25 tombs in the area from 2015 to 2018,” she affirmed.

The business of death