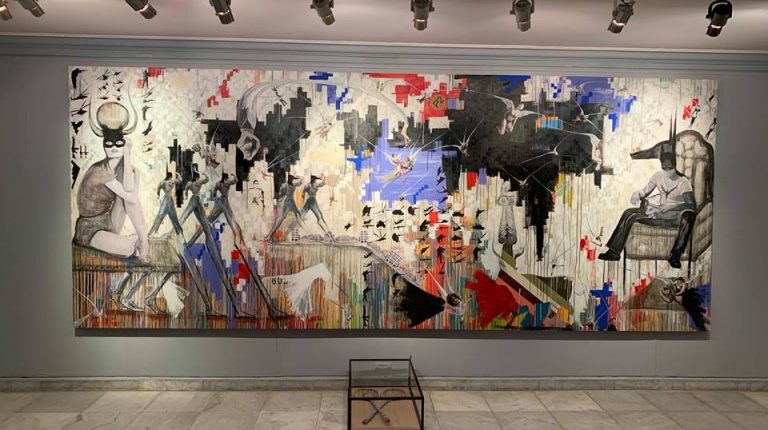 Born in Cairo in 1963, Khaled Hafez practiced medicine but decided to take a break from being a physician in the 1990s for an art career. He studied fine art, media, and digital art in Austria and New York before returning to Cairo where he currently lives and works. Hafez’s practice spans the mediums of painting, film, video, photography, installation, and interdisciplinary approaches. He has participated in multiple solo and group shows as well as in museums and international exhibitions, e.g. Tate Modern; Pompidou; New Museum; Venice Biennale in 2013, 2015, and 2017; Guangzhou Biennale; and Sharjah Biennale. 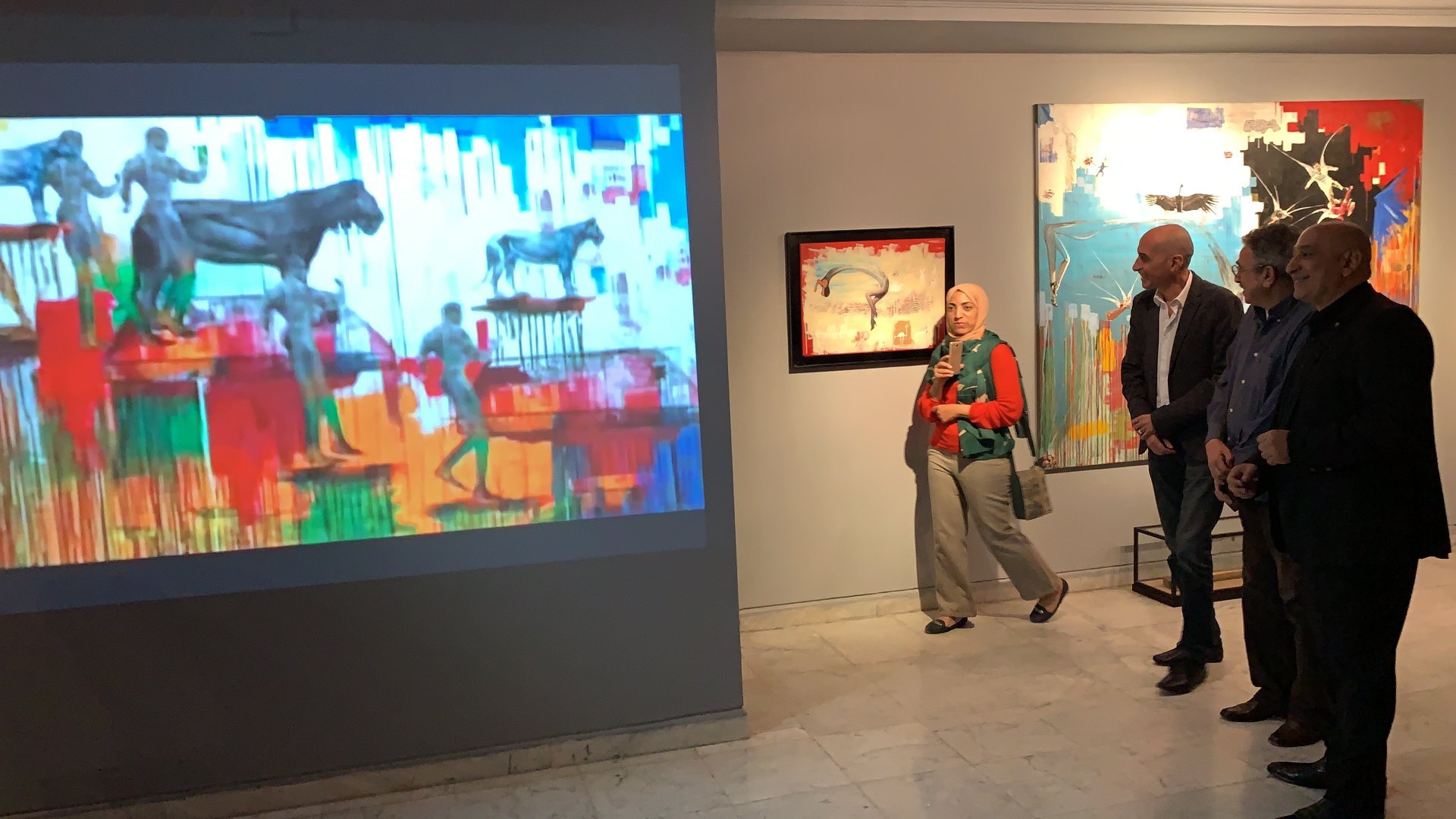 Khaled Sorour, the head of the Fine Art Department at the Ministry of Culture, commented on Hafez’s visual language stating that it is inspired by ancient Egyptian painting methods, especially the colour which is influenced by ancient murals. For over two decades, Hafez experimented with manipulated images taken from popular culture superheroes like batman to represent contemporary visual practices in juxtaposition with ancient codes, symbols, and mythological deities like Anubis.

He is particularly interested in comparing and breaking barriers between the East and the West, as well as bending and meshing the present and the past, pushing our understanding of the linear quality of time.

In addition, Hafez is also interested in the notion of identity; the question of what it means to be Egyptian, Arab, Middle Eastern, African, and many others.

Through the thoughtful and delightful multimedia use of video, painting, sculpture, and drawing, the audience is drawn into psychological questions of identity, how do people connect and address the Egyptians’ Pharaonic eras, Roman and Greek influences, with today’s global consumer world? How we identify ourselves is not always how other people identify them.

What if there is a gap of such identity misunderstanding, and is it even important whether the gap is narrowing or widening? The Ancient god of Anubis is losing his followers in the post-modern world, does he have to adopt and reincarnate as a superhero -batman- to stay relevant and close to his worshippers? 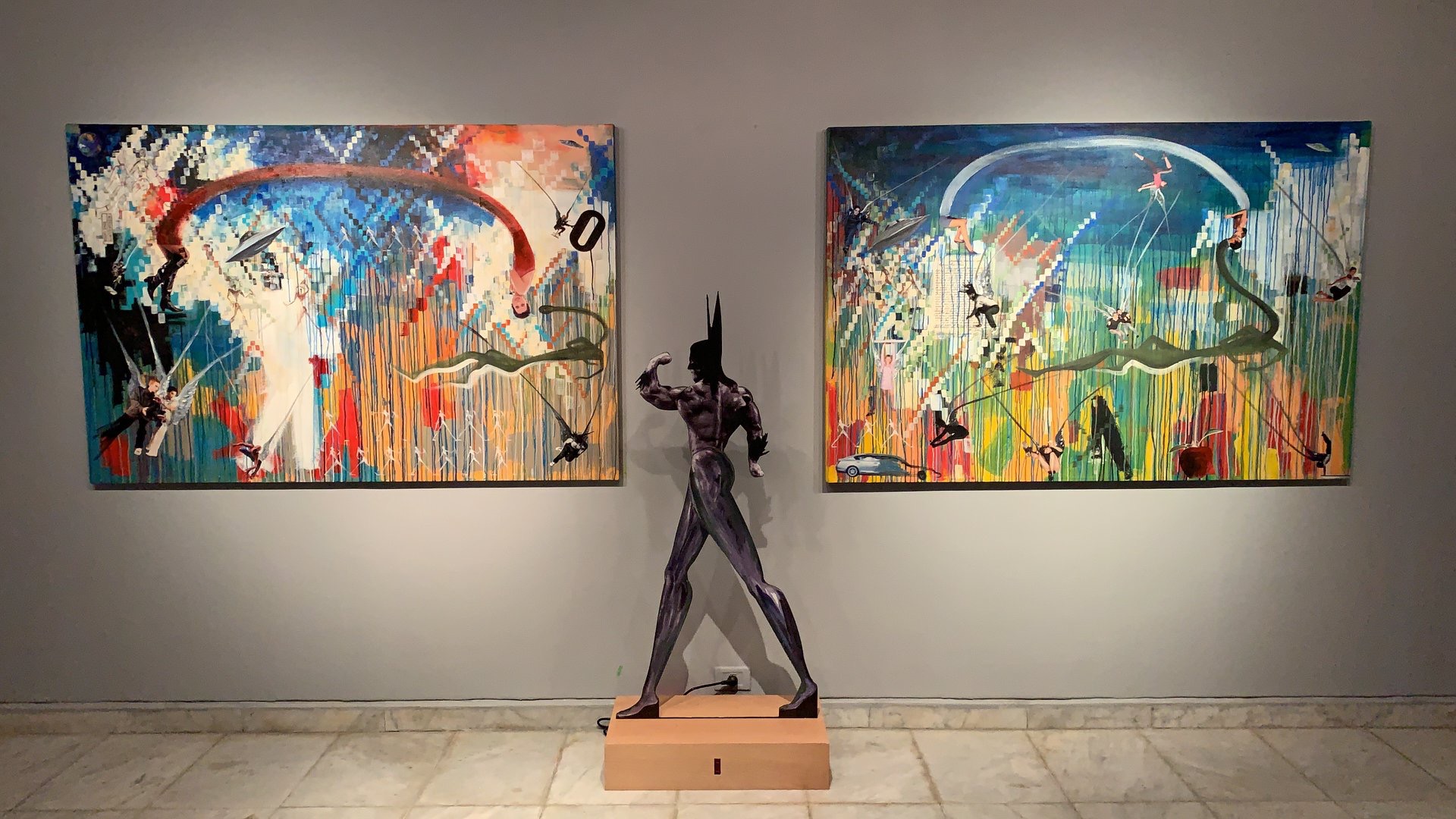 This exhibition was inspired by a reincarnated sequel to his 2010 mega installation ‘Tomb Sonata in Three Military Movements’ which was commissioned for the Cairo Biennale Curatorial team. The part II project “Second Sonata for a Tomb in Three Archaeological Movements: Sound, Light, Arm” expanded and evolved into ‘Once upon a time in Eden’ at the Ofok Gallery.

Started on 17 April, ‘Once upon a time in Eden’ grabbed the attention of large number of people. Like a spectacular firework show, with great vibrancy, the canvases have surreal composition, almost reckless use of bold colours, and endless games of hide and seeks of symbols and clues. It certainly appears that Hafez enjoys every step of the creation process, and this pleasure and joy is infectious.

This playfulness of history, deity imageries, and human psyche allow people to critically think about society, contemporary culture, and the capitalistic system.

It is amusing to figure out the clues created for visitors; maybe they will find out the reasons as to why the artist transforming ancient deities into superheroes, fashion models and fallen angels. Hafez has confessed that he is fascinated by “deciphering the ancient Egyptian methods of process painting, and the coding of a compelling visual narrative.” He wants the audience to join in the fun too.

Beyond chocolate: The egg in art and design

The Germans' annual obsession with asparagus