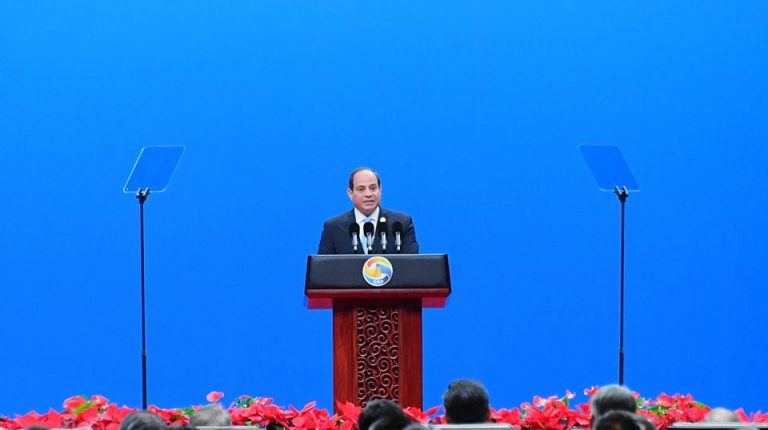 Egyptian President Abdel Fattah Al-Sisi said, on Friday, that he was looking forward to working with partners like China in order to “meet with our peoples’ expectations and the interests of our countries in stability and Development.”

Al-Sisi statement came in front of an audience of world leaders at the Belt and Road Forum in Beijing, adding that “We believe in all common similarities and challenges that regroup us as countries to work side by side on the vision on which the initiative was built, with all its axis and projects that should form the principles of aid between all parts.” he said.

The Belt and Road initiative is a large-scale infrastructure project which aims to expand global trade. The plan, launched in 2013, seeks to revive the Silk Road between Asia and Europe as well as building new links in the Middle East, Africa and South America. Leaders from 37 countries and dozens of officials are due to attend the three-day summit, including Russian President Vladimir Putin and the heads of state of all 10 ASEAN (Association of South-east Asian Nation) members.

During the meeting, Xi said that as Egypt is the rotating chair of the African Union, Al-Sisi’s attendance at the forum not only reflected Egypt’s sincere involvement in the Belt and Road Initiative (BRI), but also represented the common wish of African countries for win-win progress and common development.

The Chinese president called for the two sides to strengthen counter terrorism and security cooperation and continue to enhance people-to-people and cultural exchanges.

Wang, chairman of the Chinese People’s Political Consultative Conference National Committee, said the two countries’ joint pursuit of the Belt and Road Initiative has been deepening in recent years, and China is willing to implement the consensus reached by the leaders of the two countries and enhance bilateral exchanges and cooperation in various areas.