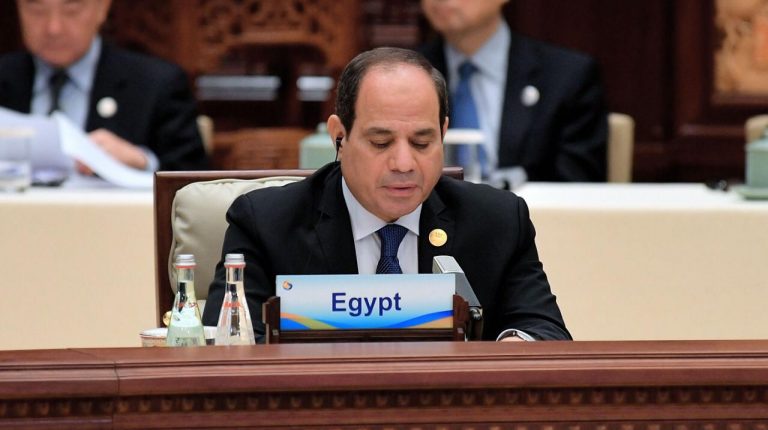 President Abdel Fattah Al-Sisi stressed Egypt’s keenness on the strategic partnership with China in view of the Belt and Road Initiative (BRI) which he said addresses vital sectors and priority areas for Egypt within the framework of Egypt 2030 Vision for Sustainable Development.

During his speech in the first session of the roundtable on the BRI annual summit in China, on Saturday, the president stressed the close relationship between the development of infrastructure and the achievement of comprehensive development.

He further called for the urgent need to provide financing for infrastructure projects in Africa in order to achieve development, explaining that Egypt is aiming to become a regional digital centre, for data transfer between continents.

On Friday, Al-Sisi said during the opening session of the summit, that the BRI addresses the upgrading of infrastructure in the fields of transport, energy, information technology, and utility projects.

The initiative also comes in line with Egypt’s development priorities in terms of stimulating economic growth, industrialisation, promoting trade and economic cooperation, increasing intra-trade and financial integration, and increasing communication among peoples through the promotion of cultural exchange.

Furthermore, Al-Sisi praised the role of the BRI in increasing cooperation between China, Arab and African countries.

During the summit, the president met with his Russian counterpart Vladimir Putin who praised the coordination and consultation between Moscow and Cairo on various regional and international issues of common concern. Putin also expressed appreciation of Egypt’s role as a cornerstone of security and stability in the Middle East and Africa.

Moreover throughout the meeting, the two presidents discussed bilateral relations, including the resumption of Russian flights to Egypt, as well as the Dabaa nuclear plan project, and cooperating in the development of the railway system, in addition to joint cooperation in security and counter-terrorism.