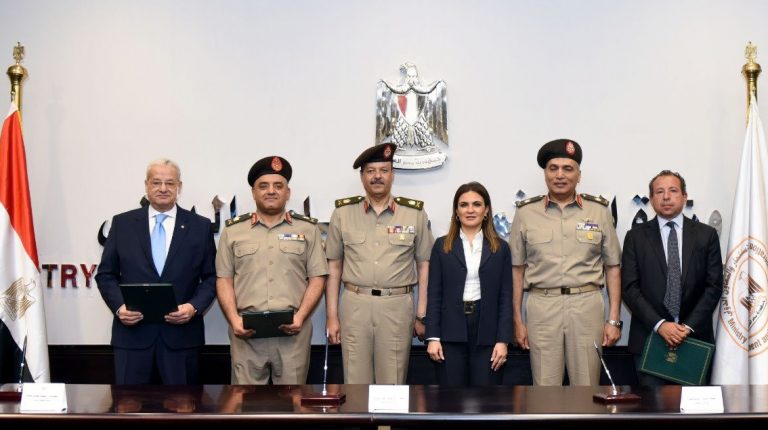 The Minister of Investment and International Cooperation, Sahar Nasr, witnessed the signing of a contract for the water treatment of Bahr Albaqar drain project between the Armed Forces Engineering Authority and a coalition which includes Orascom construction and the Arab Contractors with investments worth $739m.

The project is part of the Sinai Development Programme which is implemented with a cost estimated at $1bn, a Wednesday statement from the MIIC said.

The project includes the construction of a 5m m3 per day water treatment plant in Bahr Albaqar, which is the largest in the world, mentioned the statement, adding that the project will help in reclaiming about 330,000 feddan in east of the Suez Canal.

Nasr praised the engineering authority’s vital role in implementing the project, affirming the importance of boosting water resources’ management systems that helps in offering the best usage of the available water resources, as well as limiting the water waste in order to be used in increasing the agricultural land areas in the country.

The MIIC succeeded in offering the needed funds for the project through the Arab Fund for Economic and Social Development (AFESD), in addition to the Kuwait Fund for Arab Economic Development (Kuwait Fund), the minister added.

The AFESD financed about 63 projects in Egypt’ sectors of electricity; agriculture; education; irrigation; transportation; industry; mining; drinking water; sanitation, and social services, the statement mentioned with a total financing of about $5bn.

Meanwhile, the Kuwait Fund implemented about 50 projects in Egypt with funds worth of $3.65bn, mainly in Egypt’s fields of agriculture; electricity; transport; industry; drinking water, and sanitation.