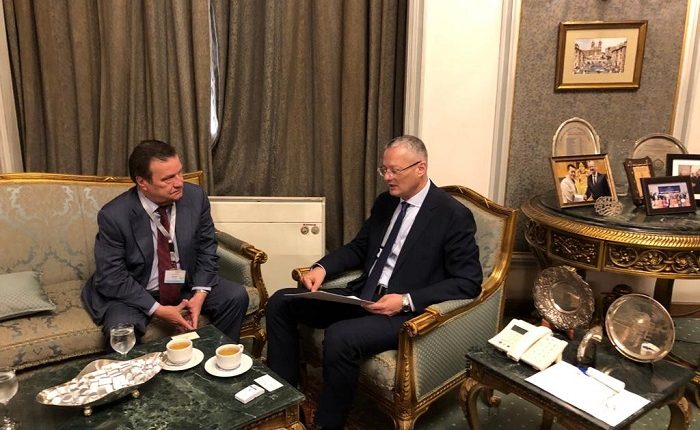 The newly-appointed Ukrainian ambassador to Egypt, Yevhen Mykytenko, presented copies of his credentials to the Assistant Minister of Foreign Affairs of Egypt, Chief of Protocol Hatem Tageldin. Mykytenko succeeds former ambassador Hennadi Latii, according to a statement of the Ukrainian embassy in Egypt on Tuesday.

During the ceremony at the premises of the Egyptian Ministry of Foreign Affairs, the parties held a friendly discussion of the current issues and their perspectives for further development of bilateral relations and expressed the willingness to boost cooperation in political, economic, and cultural fields, affirmed the statement.

More than 1,170,000 Ukrainians visited Egypt in 2018, making Ukrainians the second largest segment of foreign tourists in the country, according to a past statement of the embassy on 25 February 2019. Moreover, the trade exchange between Egypt and Ukraine exceeded $2bn in 2017.