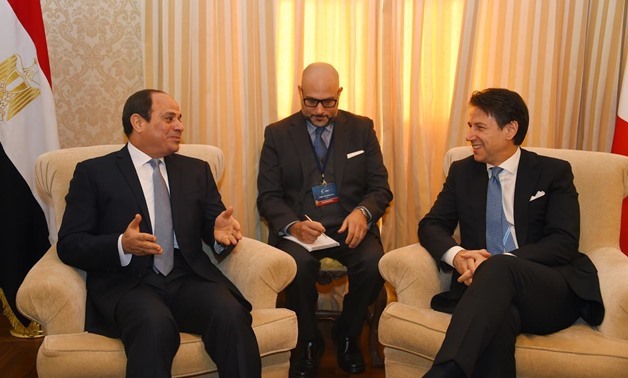 During the call, both sides agreed on the necessity of eliminating all forms of terrorism and illegal armed organisations in Libya, stressing the need to address repeated foreign interventions in Libya in order to prevent the smuggling of arms and foreign fighters into the country, while supporting the unity of the military establishment to restore legitimacy, stability and security in Libya.

The president affirmed Egypt’s support for various efforts aimed to reach a political settlement to the Libyan crisis, in accordance with the principles of the Egyptian position, which is committed to Libya’s territorial integrity, supporting its national institutions, respecting the will of its people, as well as contributing to the return of stability and security to the Middle East.

Moreover, Italian Prime Minister Conte stressed the importance of strengthening bilateral cooperation with Egypt in various fields, as a continuation of the fruitful cooperation between the two countries in recent years.

The talks included bilateral discussions and exchange of views on several regional files of common interest, especially the situation in Libya.